Log yard fire now burning itself out in Quesnel

What was once a massive fire in the log yard of West Fraser’s WestPine MDF plant in Quesnel is a much smaller one today. 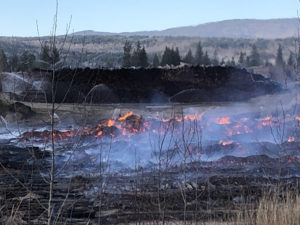 Firefighters were still on the scene through the night but left early this morning once things were under control.

Large sprinklers are set up around the fire as it appears that it is now burning out.

Firefighters were first called to the fire on Quesnel-Hixon Road at around quarter after two yesterday afternoon, and it spread quickly after that.

Duty Officer Bart Schneider said they were forced to take a defensive posture because of the very strong winds.

In the end, no buildings were destroyed but some hydro poles are down and there are people in the area without power.

BC Hydro is reporting that 5 customers are without power.