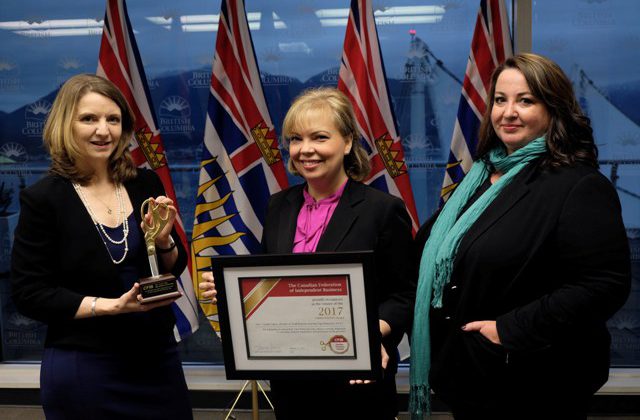 While it may be award season in Hollywood, the BC government took home a different piece of hardware on Friday.

The province was presented with the Golden Scissors Award due to its leadership and accomplishments in reducing red tape.

Minister of Small Business and Red Tape Reduction Coralee Oakes says it all began by implementing a button.

“One of the first things we did in reducing red tape is that we have a button people can put their ideas in 24/7 and when that idea strikes and if you have a good idea or an experience that wasn’t positive you can submit it to Reducing Red Tape 24/7.”

The Help Cut Red Tape submission button and the public engagement session generated over 500 ideas and since 2015, the province has taken action on almost 200 of them.”

Oakes adds the province is in a much better spot than they were in 2001 after recalling a certain situation.

The Canadian Federation of Independent Business also gave the province an “A” grade for the sixth straight year.

BC adopted the one for one policy back in 2014, where a new rule comes in and another comes out.

The CFIB would like the province to make it law in the future.

(Files from Brendan Pawliw with MYPRINCEGEORGENOW)