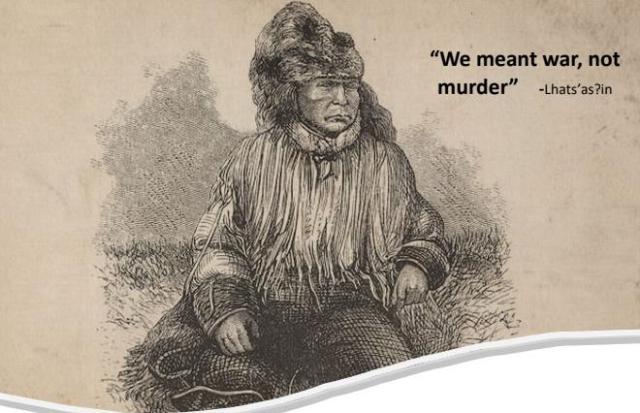 A send-off ceremony for a Tsilhqot’in delegation journeying to Ottawa to witness Canada acknowledge their Tsilhqot’in War Chiefs did no wrong and were heroes protecting their land during the Chilcotin War takes place this morning at Tl’etinqox school.

Chief Joe Alphonse told MYCARIBOONOW in November when the Government of Canada announced it’s intent, that he did believe that the government before would have entertained doing such a thing and said that it is a good start to reconciliation.

The War Chiefs will be exonerated by Canada on behalf of Prime Minister Justin Trudeau on Monday, March 26. The exoneration will be live streamed in Williams Lake at the Gibraltar Room at 12:30 pm.

Under the threat of smallpox and further loss of people and land, the Tsilhqot’in declared war, and on  April 30, 1864, the group of warriors led by Head War Chief Lhats’as?in attacked and killed most of the men making up the camp of the road crew.

Unable to persuade any Tsilhqot’in to betray the war party and out of rations, the Governor made plans to withdraw in defeat on July 20, 1864. That afternoon, a Tsilhqot’in diplomatic party came to his camp which was the first-ever meeting between Tsilhqot’in and Colonial representatives.

Lhats’as?in and seven others came unarmed for this discussion of peace on August 15, 1864 in which the Governor was not there.

Chief Lhats’as?in, Chief Biyil, Chief Tellot, Chief Tahpitt, and Chief Chayses were hanged by the Colony on October 26, 1864, in Quesnel. Chief Ahan was hanged in New Westminster on July 18, 1865

The Tilshqot’in Nation said in the final words of Lhats’as?in, exoneration means that Canada is finally acknowledging that our War Chiefs “meant war, not murder.”