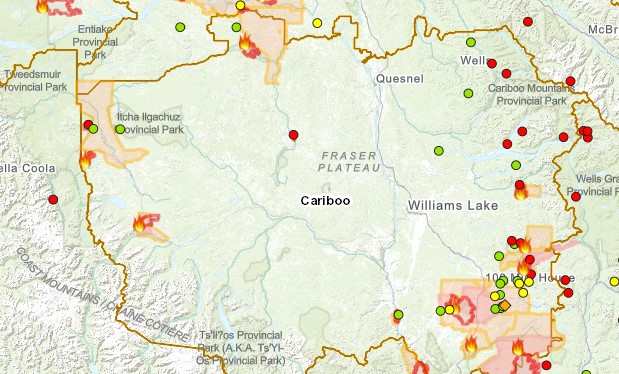 The Flat Lake Wildfire has reportedly advanced to Highway 97 at 82 Mile and Green Lake Road.

Fire Information Officer Rosalie Macaulay says there were some spots across the Highway, but Structure Protection Personnel and Volunteer Fire Departments were on-site patrolling the area.

“Today the crews are working in that area and heavy equipment will be building a guard in this area,” Macaulay says “that will be from the 83 Mile point on Highway 97, north to Bullock Lake Road and towards Davis Lake.”

The Flat Lake Fire is listed at an estimated 26,191 hectares in size, which is a result of the more accurate mapping. This includes Monday’s (July 19th) growth, which was to the North and West.

The BC Wildfire Service says heavy smoke is impacting Highway 97, and to check Drive BC for the most up-to-date information.

Macaulay says there was some fire behaviour in the southwest corner of the Canim Lake Fire, but it remained within containment lines.

“There were crews out overnight patrolling this area, and there were no issues.”

That fire is listed as an estimated 2,487 hectares in size.

Other fires around the Cariboo such as the Big Stick Lake Fire, Hotnarko Fire, and the Purdy Lake Fire received some precipitation overnight.

The Big Stick Lake Fire is estimated to be 8,000 hectares in size.

Fire information Officer Madison Smith says the fire has a significant guard around it, and crews are making progress on this fire, with help from wet weather.

The Hotnarko Fire is estimated to be 1,500 hectares in size and is demonstrating low-intensity fire behaviour.

Smith says this fire has not crossed Highway 20, but drivers should check Drive BC, because the highway could be closed with limited notice because of wildfire activity.

Smith says the McKinley Lake fire is estimated to be 1,834 hectares in size, and there has been no significant growth in the past few days. She says crews are still facing challenges with this fire.

“Our crews are encountering a bit of a challenge in the terrain around McKinley Creek,” Smith says, “It’s very steep and has thick bush, so our crews are having to work through that. They’re still being successful, and there’s been no growth.”

Smith says the Chasm Fire is doing really good and is around 400 hectares in size. She says crews are on-site continuing with mop-up operations.