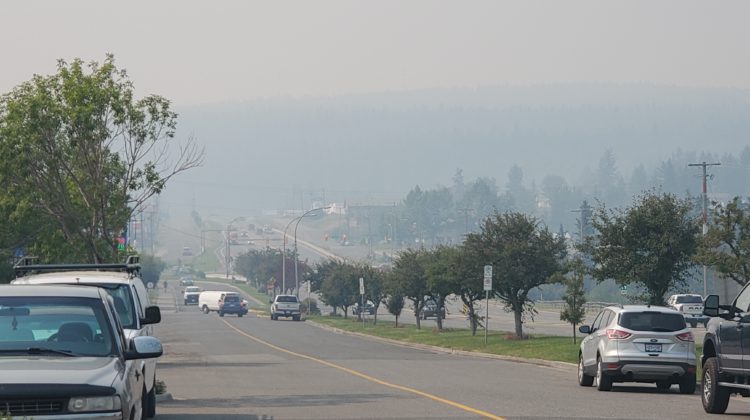 The Flat Lake wildfire that has 100 Mile House on Evacuation Alert, and he led to the evacuation of more than a thousand properties in the Flat Lake to Green Lake North area, is expected to grow again today. (Thursday)

“The growth is expected to be primarily in the east and north directions, so east being towards Highway 97 and north is moving in the direction of 100 Mile House.   However, I would say I don’t want to cause any panic, the fire is still quite a distance away from 100 Mile House.”

Bull estimates that is between 20 and 30 kilometres away from 100 Mile. 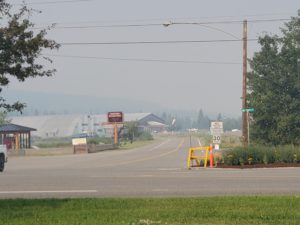 She says they have been unable to map the fire for an update on its size due to all the smoke in the air, so it is still estimated at 8,725 hectares.

Bull says the plan for today is to continue attacking it primarily from the air.

Bull says the helicopters are flying out of the 108 Mile Airport while the air tankers are more of a provincial resource.

She says they will typically come from Williams Lake or Kamloops, although they can be redirected from any area, depending on where the greatest need is and where they have the greatest chance of success.

Bull says structural protection units are also being used on the Flat Lake fire, within the evacuation order area.

The South of Canim Lake wildfire is still mapped at an estimated 1,681 hectares in size, but Bull believes that fire has also grown.

“There was some increased activity observed on the south flank of the fire, so that is moving away from the communities.  However, not last night, but the previous night (Tuesday), there was increased fire activity on the north slope which is moving towards Canim Lake, so that did prompt a tactical evacuation, and the issuing of an evacuation alert by the Cariboo Regional District.”

Bull says the fire was much less aggressive yesterday (Wednesday) and overnight.

She says they also have structural protection units set up on a number of properties due to that fire though, as well as established sprinkler lines on the slope where the fire is.

There is an Evacuation Order in place because of this fire for 482 properties from Canim Lake South to Mahood Lake area.

More than 1300 other properties are on Evacuation Alert.