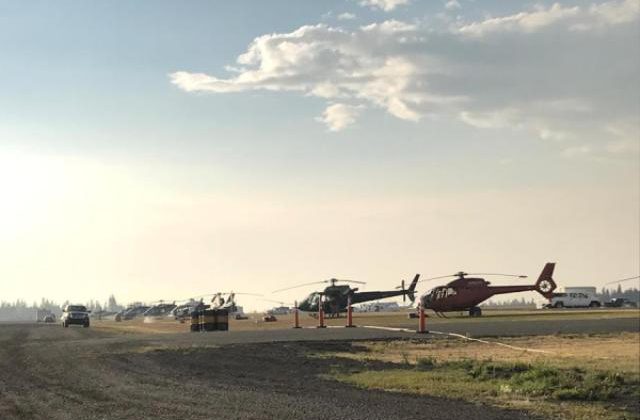 Fire fighters continue to make some progress on the Gustafson wildfire that has forced 100 Mile House residents from their homes.

Heather Rice, Fire Information Officer for the South Cariboo, says it is now 20 percent contained…up from 15.

Here she tell us what they’ve been doing….

“I can tell you that the controlled burn they did yesterday did go off very well and achieved the objectives that they were wanting which was to bring that fire down to the guards and remove some of the more volatile fuels within the fire. ”

Rice says they now have more than 200 fire fighters on it, including a couple of teams from Ontario, as well as 16 helicopters and 43 pieces of equipment.

It remains at 5 thousand hectares and hasn’t grown now for a number of days.

Despite that, Rice says it is likely going to be a long process…

“That is a lot of area and when you think that we need to mop up and ensure that that area is almost completely out. And the amount of hot spots that will remain in that area until we get a significant rainfall. If we receive significant rainfall that changes everything and that can really help with the containment and with ensuring we’re not going to get flare ups and a higher confidence level that the fire is not going to re-ignite at some time.

Rice says they could be there until September, if not later.

In the Central Cariboo, Fire Information Office Noelle Kekula says Williams Lake residents could see some activity today from the Wildwood fire, but that they shouldn’t be alarmed…

“If the weather permits today we are planning a burnout operation similar to the one on the 150 Mile fire a couple of days ago, so if you see a large plume of smoke to the northeast of Williams Lake this is the crews doing that burnout operation to reduce any unburnt fuels around the perimeter of the fire.”

Both the Wildwood and 150 Mile fires remain unchanged from yesterday and are still about 3 kilometres apart.

The White Lake Fire, that has Williams Lake residents on evacuation alert, is still 38-hundred hectares and 60 percent contained.

And crews also continue to work on the fires in the West Fraser complex and the Green Mountain fire in the North Cariboo today as well.

Narcosli residents remain evacuated because of the West Fraser complex of fires about 30 kilometres south of Quesnel.

It was 120 hectares at last report and is being held.

The Green Mountain fire, 25 kilometres southeast of Quesnel and the one that has Kersley residents on evacuation alert, is 520 hectares and is 80 percent contained.