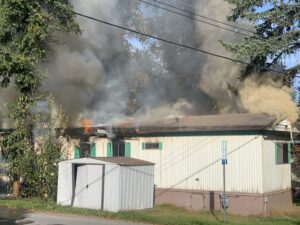 The Quesnel Volunteer Fire Department was called to the Bartels Mobile Home Park at 654  North Fraser Drive just after 3 o’clock on Friday afternoon.

“Upon arrival crews had a fully involved trailer, and the trailer next to that was also on fire. The one trailer will be a total write off and the other has significant damage.  We do have one person that was transported to GR Baker Hospital with burns.”

That person was in the trailer that was destroyed.

Fire fighters were still on scene at 5-30 dealing with hot spots.

Richert says they had mutual aid.

“We called in Bouchie Lake Fire Department and they brought in both water tenders.”