The Quesnel Volunteer Fire Department responded to a structure fire in West Quesnel on Tuesday (Nov 9) during the 5 o’clock hour. 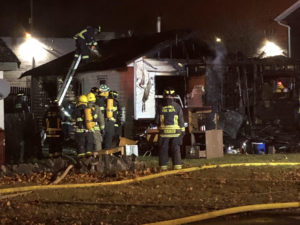 Duty Officer Bart Schneider says they got the call while they were working on the log yard fire out on Quesnel-Hixon Road.

“We were working on the other fire. We got a call for a structure fire on the west side on Willis Street.  We had some crews that were standing by at the hall and they responded to this one directly, transferring command to Chief Richert.”

Schneider says fortunately no one was in the building at the time.

Schneider says they had some crews at the hall standing by in case there was another fire, and he says they also received more mutual aide from nearby departments.