More Evacuation Alerts have been lifted in parts of the South Cariboo.

“The area that stayed on alert buts up to the order area, and the one that we have lifted is more kind of the North Green Lake and the Horse Lake/Sheridan Lake area.”

Both were being impacted by the Flak Lake wildfire. 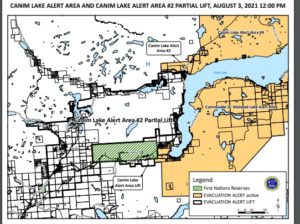 “The Canim Lake First Nation is off alert, but at the northern end of their territory all the way on Canim-Hendrix out to just past the Bosk Canim Forest Service Road is still on alert, and that’s because of the Secour Lake fire.”

Both of the alerts that were lifted were due to the South of Canim Lake wildfire.

There is just one evacuation order that remains in place for the Cariboo Regional District and that is for the original Flat Lake/Green Lake area due to the Flat Lake fire.

“For the people that are on alert, an order could come at any time.  And for the people that have just come off alert, I would still say be a little bit prepared.  When I was evacuated twice in 2017, and I never did unpack my big go to tote with kind of the photographs and all that stuff in, it was still up on the shelf for me to grab when I went.”

Wagner, who lives in Canim Lake, says the smoke this year has been even worse than in 2017 when both Williams Lake and 100 Mile House were evacuated.

“In 2017 the fire was right up directly up behind my house.   I think the reason (it is worse) is the humidity seems to be worse this past few days, because the smoke layer has been so thick and its been hot, and the humidity that comes off this lake because of the heat has stayed close to the ground. Yesterday (Monday) it was so clammy out it was brutal and I think that is what’s making the smoke stay.”

Wagner says she had her lights on at 6 o’clock in the evening.

She says the smoke does seem to be a lot better today (Tuesday) as she can see quite a ways down the lake.