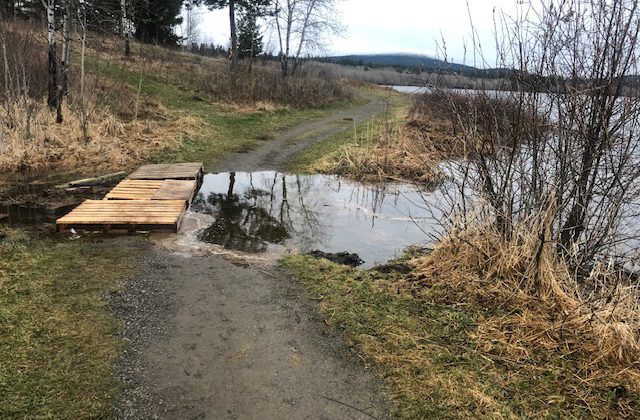 Some water was released from the 108 Lake yesterday (April 27)

Al Richmond, Cariboo Regional Director for Area G, Lac La Hache/108 Mile, said after about 15-years of extreme drought conditions and low lake levels, and the water we’re experiencing in the Cariboo this year, has come and the creek that feeds the 108 Lake has been running for most of the year so the lake levels are probably as high as it’s ever been since the 70’s and it reached the point that it began to flood some of the trails around the 108 Lake.

“There’s an unlicenced structure at the end of the lake that was put in back in the 50’s,” Richmond said, ‘And we had to work with the Ministry of Environment to develop a plan as to how we could reduce lake levels without impacting people downstream from it, so they came down and did an inspection and made some recommendations the Greenbelt Commission and the Regional District will be undertaking an extensive engineering review of the lake level and coming up with some permanent solutions to maintaining that outflow without the use of a control structure.”

Richmond added this will be done probably late summer, early fall if the engineering’s complete and ready to go and the plan is signed off by the Ministry of Environment.

The creek it feeds into no water has flooded out of the 108 since the late 90’s and this is the first time the creek has flowed at the rates it’s flowing currently.

“We were able to get some water to flow around a control structure because it’s rusted and old, and frozen in place, so we managed to make some adjustments to it with the help of a few volunteers yesterday and we got some water flowing overnight.” Richmond said, “That said the lake still came up about a half an inch overnight and we’re now working with Ducks Unlimited to see if we could reduce some of the flows that are coming into the 108 Lake from Sepa Lake.”

Richmond noted we have people monitoring the creek to make sure that we don’t end up with any flow problems downstream at the present time and hopefully return this to what mother had perhaps some years ago. We’ll have an engineering firm come in and determine those levels and develop a plan as to how we can maintain lake levels giving consideration to the wildlife and to the fish that live in the lake.