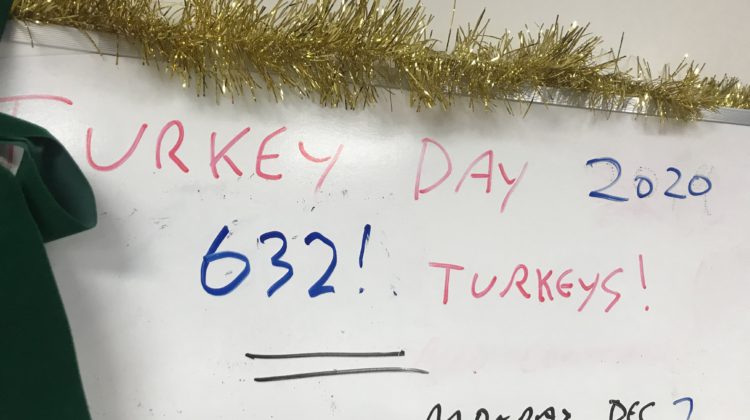 The annual Turkey Day fundraiser from Country 840 has come and gone, and the total money raised is a staggering amount.

The fundraiser, which benefits the 100 Mile House Food Bank’s Christmas hamper distribution, brought in 632 ‘turkeys’, which is a $25 donation, equating to $15,800.

Although the crowd around the Country 840 studio was a lot smaller than past years, local dignitaries and public figures attended to show their support. The guest list was limited to two guests per hour. Both the current and former MLAs of the Cariboo-Chilcotin riding, Lorne Doerkson, and Donna Barnett made an appearance, as well as 100 Mile House Mayor Mitch Campsall, who depending on who you ask, thankfully didn’t sing this year. Even former Country 840 Morning Host Larry Rode phoned in to join in on the fun.

“We thank everyone that pledged a Turkey this year,” says Country 840 Morning Host Chris Adams “We’re still accepting pledges and donations here at the station”.

This year’s goal of 400 turkeys was surpassed on Friday, December 5th, and this year marks the first time the goal was met before the day of Turkey Day.