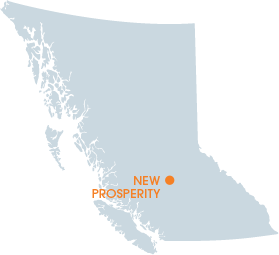 A petition seeking judicial review of a decision of BC’s Ministry of Environment refusing to extend the time allotted to start work for a gold-copper mine southwest of Williams Lake has been dismissed.

The BC Supreme Court dismissed the application by Taseko Mines Limited (TML) on Friday.

TML was issued an environmental assessment certificate by B.C. for its New Prosperity mine project in 2010 and was required to have made a substantial start on the project by no later than January 14, 2015, or it would expire.

TML was granted an extension of the substantial start deadline for a further period of five years to January 14, 2020.

In an effort to prevent the certificate from expiring while TML sought to overcome the regulatory and litigation hurdles it has been facing, TML applied to the Province for a second five-year extension to January 14, 2025.

It would be denied on February 19, 2019, with the Minister refusing the application on the basis that he had on his reading of the Environmental Assessment Act no jurisdiction to grant a further extension.

“While I agree with Taseko that among those objectives is the need to reconcile the interests of project proponents with environmental protection, it does not follow that the Environmental Assessment Act (EAA) must be interpreted in a manner that would preserve an Environmental Assessment Certificate from expiring merely because the holder has been unable to start construction for reasons that may be partly or even wholly beyond its control,” Mr. Justice Milman wrote.

The site located approximately 125 kilometers southwest of Williams Lake is one of the largest undeveloped gold/copper porphyry deposits in the world. Once developed, the New Prosperity mine according to TML would produce 250,000 ounces of gold and 110 million pounds of copper annually for 20 years.

The project has been twice rejected by federal regulators.

While it was seeking to obtain federal environmental approval, TML began preparations for an exploration program to collect the data required for permitting under the Mines Act to be in a position to meet the extended deadline to start work.

TML would be granted an amendment to its permit from B.C.’s Ministry of Energy and Mines for that exploration work to proceed on certain conditions in July 2017.

No work has yet commenced and an injunction was recently granted to the Tsilhqot’in Nation until a new trial to prove that the drilling represents an unjustified infringement of the Tsilhqot’in’s proven Aboriginal rights is heard.

PM; “We are still in the emergency phase”