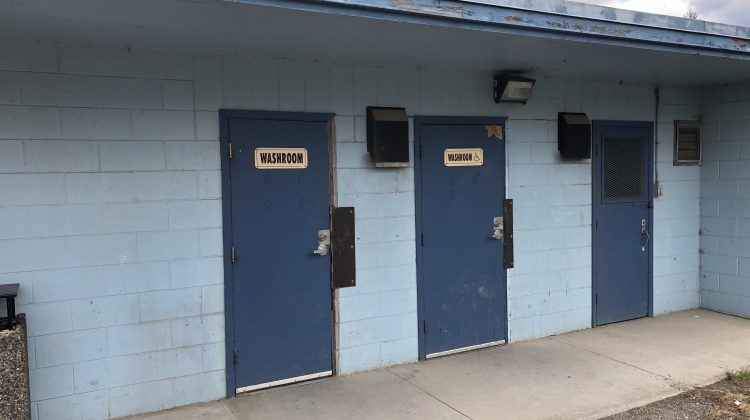 public washrooms located across from Ceal Tingley Park have been closed by the City of Quesnel due to safety concerns. (G Henderon, MyCaribooNow.com staff)

The City of Quesnel is closing the public washrooms across from Ceal Tingley Park for safety reasons.

Mayor Bob Simpson says they were left with no choice…

“We’ve been struggling to maintain the availability and access to our public washrooms for quite some time because of people going in there and using drugs, leaving drug paraphernalia. And now that they’ve gone back to inhaling various forms of drugs we’re ending up with toxic smoke in those washrooms.”

He says they are blocking all of the vents and inhaling their drugs, leaving behind a toxic fume and making it unsafe for the city’s employees and the general public.

Simpson says the city’s other public washrooms, at Spirit Square, LeBourdais Park, on the Riverfront Trail below Bowron Avenue, and at Sugarloaf Dog Park, will remain open.

“We’ve had to put on extra security, we’ve had to do sweeps before workers can go into them to make sure they are safe spaces for workers to clean and maintain those. And we have had some instances of situations in there that have created some public safety issues, so that’s a bit of an ongoing situation and it would be a crying shame after years of our seniors’ community asking for those washrooms to have to also close those ones as well.”

Simpson says what he would say to advocates for people who are homeless and in the throes of addiction, is that we need to get on top of creating safe public spaces for the citizens who are paying for the programs and services of these individuals.

He asks the advocate community to make sure that these individuals respect public spaces.

Simpson says the individuals that the advocates are fighting for won’t be well served if this doesn’t happen.