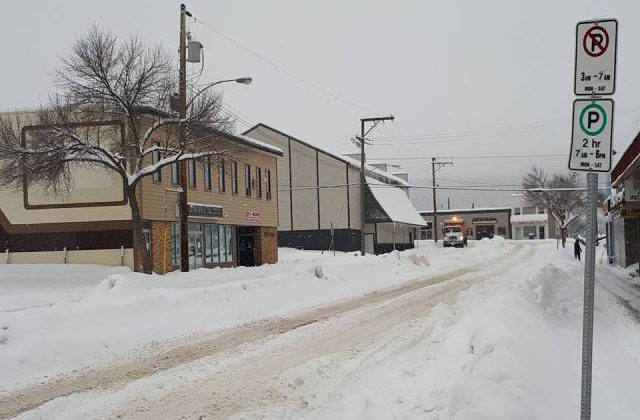 Updated: Salt could be eliminated from Williams Lake’s winter road maintenance program over the next five years.

Williams Lake City Council gave discussion to the subject at Tuesday’s committee of the whole meeting.

“We still need a pretty bulletproof policy based on the expectations of the community,” said director of municipal services, Gary Muraca.

“We’ve fine-tuned it every year based on the expectations of the community, so any further reductions in the use of salt will come with a reduced service. I’m not necessarily saying it’s a bad thing but it’s what you guys would want to support. So you can drive on a compact flat surface with sand on it and have as much traction, but right now the expectation is bare roads.”

“If we want to print a bare road you can’t do that without the use of salt. It’s just impossible.

Councillor Jason Ryll said Williams Lake is the only community in the Interior that has a bare road expectation.

“We have pretty high expectations in our community to our roads compared to like northern communities,” Muraca said.

“Even southern communities you wouldn’t find the level of black pavement in Kamloops for instance.”

“We are regulated federally to monitor our salt use and be responsible for our salt use,” Muraca said. “We have to do reports every year on this so we have reduced that. We try not to go over certain areas twice.”

Muraca said $30,000 for GPS in their fleet that would tell them which areas have been previously sanded and salted is being proposed for the 2020 budget.

“So you can achieve the same expectations we have right now and reduce the salt use with a little technology, or you can take out the whole salt like Quesnel that doesn’t use salt.”

Councillor Scott Nelson and Mayor Walt said they both fully support eliminating the use of salt.

“But number two when you look at the salt that builds through the ice and melts the ice and becomes water and gets in a crack and then it gets cold enough to freeze, all of a sudden we got a bunch of potholes.”

Muraca said the City does not use salt but a chemical application in January and February.

“Some municipalities will go out and put it down on the street before a snowstorm. We don’t use it that way. We use it to burn the sand or salt into the existing compact, and it stays there so you’re using less sand,” Muraca said.

“We don’t use it very much but it’s very important.”

Cobb said as well as no salt he would also like to see the potential for no chemical application.

“I think that was part of the original concept,” Nelson said.

“A. was there potential cost savings to the city to get away from bare roads policy set out to the Public Works to review and bring back the recommendation to look at, but at the of the day, I agree with the Mayor. I think five years out we shouldn’t be using salt on the roads.”

“A number of our outflows go into the lake, so if the salt is put on the roads it goes right into the lake and I go back to the point that it’s a precious jewel for this community,” Nelson added.

Councillor Ivan Bonnell said while he did not mind getting information and talking about how we can try to do things differently to achieve better outcomes, he is concerned about the safety aspect in the community when you have ice buildup on the roads and are not using salt anymore.

“We have many grades in the community where you’ll just spin right through a stop sign and you can’t stop. I’ve done that many times just coming through Boundary and there’s ice just on that little street,” Bonnell said.

Councillor Sheila Boehm said she believes it is important for City crews to learn about what other communities are doing.

“It’s not so much the crews as it is the driver’s behavior,” Bonnell said.

“That’s’ why I said you need an education component as well,” Cobb said.

Councillor Jason Ryll said while he was in support of the proposed motion he wanted to be the voice of caution to his colleagues.

“This is a fundamental change in the public’s expectations,” Ryll said.

“The public’s expectation is going to be very high for our public works during the winter. That from tonight will change so that education piece has to start as soon as possible, and it means that all of our phone lines are going to burn up and how terrible of a job that we’re doing in the wintertime, so be prepared for that.”

As the discussion was at a committee of the whole council meeting, no decision or motion was passed.

Director of Public Works Operations, Matt Thomas told MyCaribooNow that the City of Quesnel uses a one to two percent salt mixture that is put into their sand before being applied directly to their roads.

“The sand would be used but there would be a small amount of salt in it just it to keep it from clumping,” Muraca said.

(Editor’s Note: This story has been updated to include comment from Matt Thomas, Director of Public Works Operations for the City of Quesnel.)