Do you know an amazing woman who has a positive impact on their community?

If so the Williams Lake Women’s Contact Society would like to hear from you as they’re currently accepting nominations for their Women With Heart Award. 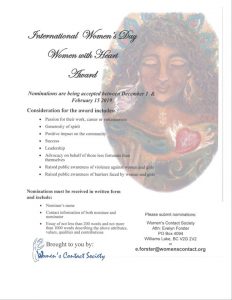 “I haven’t gotten any nominations sent in yet,” said Evelyn Forster.

“I’ve had some interest in more information so I’m hoping that we’ll start getting some nominations in now that the holidays are over and we’re into the new year.”

The Women of Heart of Award was developed by the Women Contact’s Society Board of Directors in 2010 to recognize successful, strong women and to celebrate the positive impact and contributions they have made to Williams Lake and area.

Nominations will be accepted until February 15th.

The first Women with Heart Award was given out in 2011 to Diane Wright. Other past recipients include Sunny Dyck, Irene Johnson, Lynette Cobb, Denise Deschene, Joan Gentles, Aileen Hewitt, and June Striegler.