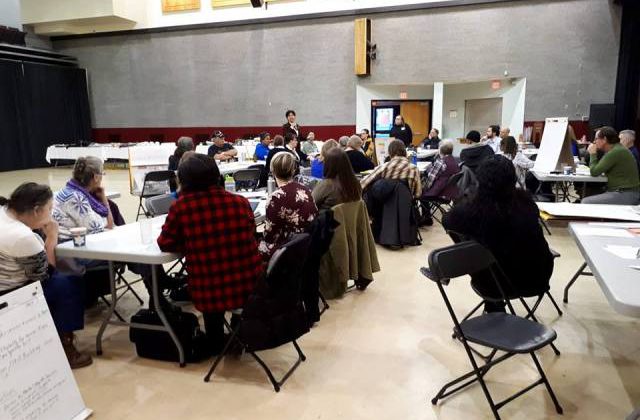 The Gibraltar Room at the Cariboo Memorial Complex in Williams Lake saw the community gathered Friday to discuss the issues facing people in poverty and how to address them.

Vancouver-Kensington MLA and Parliamentary Secretary for Poverty Reduction, Mable Elmore says she was pleased with the turnout.

“We had the Mayor, we had City Council, we had the RCMP Inspector and Staff Sergeant, we had folks who work in Interior Health, we had people who were homeless, a fellow who had a disability and who had just gotten a home,” she says.

“So right across the range. It was a lot of different perspectives coming forward.”

Elmore adds that there was also good representation from First Nations and that she had the opportunity to visit the Friendship Centre and meet with a representative from the Metis nation to hear their perspectives as well.

“I think we saw a good working relationship with many of the organizations, community groups, with the RCMP, and with Interior Health, she says.

“That’s really important because poverty is complex. There’s a lot of different sides of it and often people in poverty they commit crimes, they become arrested, and it becomes a cycle. So it’s important to have everybody working together and I think that that’s a really strong practice that we see here in Williams Lake.”

Ideas shared at Friday’s meeting will help inform the province’s Poverty Reduction Strategy that is scheduled to be released in fall 2018.

When asked what the number one concern Mable heard when it came to poverty in Williams Lake housing topped the list.

“That was really the biggest need that people have adqueate housing with affordable rents.”

A community meeting is scheduled to take place in Quesnel.

It runs Saturday, February 3 from 10 am until 12:30 pm at the Native Friendship Centre on North Fraser Drive.

(Editor’s Note: The time of the meeting in Quesnel was incorrectly reported. We apologize for any inconvenience this may have caused.)