The Superintendent for School District 27 says that many of the issues made Wednesday in a statement by the Cariboo-Chilcotin Teachers Association (CCTA) are being addressed through their collective agreement.

Mark Wintjes responded to a media release made by the CCTA announcing that a motion of non-confidence was passed without dissent in the Superintendent, Secretary-Treasurer, and Board of School Trustees at its Special General Meeting held Monday night.

“(But) the Board does address concerns by the CCTA and other stakeholder groups through its’ policy and collective agreement language. Many of the issues are currently being addressed through our collective agreement so it would be preemptive of me to make comment on it through the media as those processes are not yet complete.” 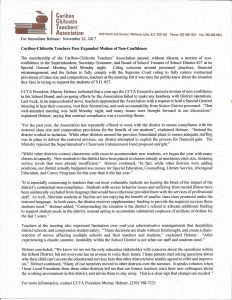 CCTA President Murray Helmer admits that although the CCTA have not had a direct conversation with School District 27 following Monday’s motion, he says they do not have a functional relationship.

“A lot of the contract restoration around the province has gone on between Boards and Teachers’ Associations with a very cooperative process,” says Helmer.

“We’ve been shut out of this process ever since the Supreme Court ruling in November of last year. All attempts for us to become involved, to get information have been all been thwarted. It’s been a very one-way street here, and it’s been very frustrating for everybody.”

Helmer says that Monday’s special general meeting was called for by staff at Columneetza.

“This was the Thursday before fall break so we set up the meeting for the Monday upon our return and we had a very large turnout of members interested in having the discussion in how the school district is operating currently.”

“A lot of it is around the implementation of the restored contract language and the failure of the District locally to adhere to all the conditions that had been put in place especially around support services for students with special needs-that was one area; continued financial concerns that the District is continually running a surplus of millions of dollars from year to year and that money is not getting into the schools and supporting students, and then there’s just general personnel decisions.”

Helmer says that the meeting, in fact, was called in the first place by staff because they had lost one of their senior vice principals in a transfer to Horsefly leaving the school with around 800 students with just one vice principal.

This marks the second non-confidence vote by the CCTA following a motion last year by the CCTA Executive. Helmer says that that motion was passed at the time when there was a lot of upheaval around the superintendent’s position in which the previous superintendent had left and the assistant superintendent was appointed but stepped back after some issues arose at the District level.

“An acting superintendent was put in place. The whole process was clouded in secrecy-it was problematic and we were concerned at the time,” explains Helmer.

“This particular motion is called upon by the members of the Association and they were the ones that wanted this message put out there.”

The School District according to Wintjes always has communications with the CCTA and says that it’s a matter of options under the collective agreement and board policy to bring their concerns forward.

“It’s a matter of taking those appropriate channels so we can have those discussions outside of the media so there can be fulsome discussions with them,” he says disputing Helmer’s statements.

As for what’s next for the CCTA, Helmer says it is a bit of wait and see.

“We do have some areas around the staffing and support services and alternate class sizes that we are still trying to have addressed by the District,” says Helmer. “We’ve been through the provincial process that was set up by the memorandum of agreement between the government and the BCTF for dispute resolution. We haven’t had any resolution out of that process and we’re frustrated that our teachers are struggling with the situation that they face with trying to meet the needs of students without the support that should be in place.”

“We’re hoping that some pressure can be put on, perhaps some concerns from parents so that these issues can be addressed.”

Although the next Board of Education meeting for School District 27 is scheduled for November 28, Helmer says the non-confidence vote will not likely be brought up calling the meetings ‘not accessible.”

“That’s another one of our issues,” he says. “If I was wanting to speak to a board meeting I would have to submit a script to them of what I was going to say well in advance to the meeting. I believe that deadline has already passed, and then when I stand before the meeting I actually have to read from that script.  I can’t go off script and they also do not respond, and that is written right in their meeting process.”

“It’s a futile way of trying to get answers.”