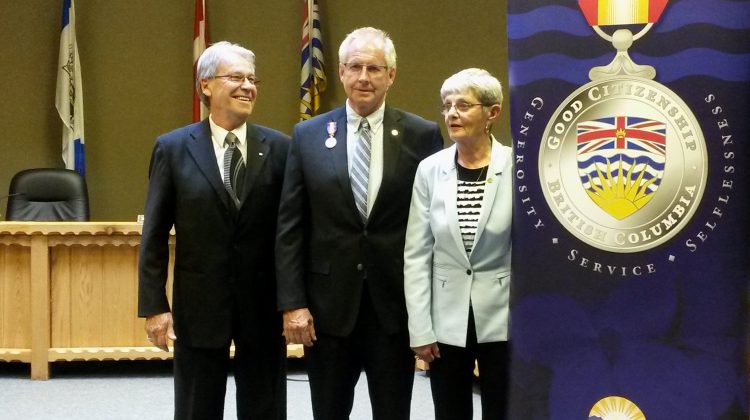 Williams Lake City Council Chambers were packed with members of the community to celebrate a local volunteer who was presented with the Province’s Medal of Good Citizenship Tuesday afternoon.

Dave Dickson says as long as he remembers, volunteering has been a part of his life.

“I got interviewed by CBC the other day and Doug Herbert said hey when did you start volunteering and I really did have to do some deep thinking. I was raised in the prairies and the thing to do was on the weekends we’d go to Regina and see my grandparents and I was just a little guy, likely six or seven years old and what did you do? There wasn’t much to do at your grandparents, so you would take a snow-shovel or a rake and go and help somebody in their yard.”

Dickson says volunteering is something that he enjoys doing, and that it’s about seeing somebody smile.

He says the blessing for him in the last 43 years, is that he wouldn’t have been able to do it without the support of his wife.

The Award was presented to Dickson on behalf of Premier Christy Clark, by Cariboo-Chilcotin MLA Donna Barnett who says it was a great honor to nominate him.

“The Mayor and the City of Williams Lake supported the nomination and your Inspector (RCMP Milo MacDonald) wrote a fantastic letter. And so with all that put together, and what he’s done, there is nobody greater in this area to receive this than Dave.”