The Quesnel Volunteer Fire Department and RCMP responded to a vehicle fire in the downtown core this (Tuesday) afternoon. 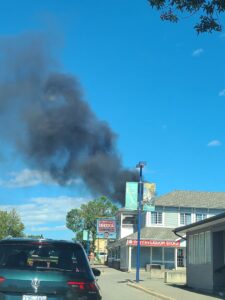 Fire Chief Ron Richert says they were called to the alley between Reid Street and Front Street at 12-53 p.m.

“Upon arrival we had a single vehicle commercial truck that was fully engulfed and in close proximity to some buildings. Quick response by our engine 11 crew quickly extinguished the fire and there was no damage to the buildings, although the vehicle was a total write off.”

Richert says there were two explosions.

“The explosion that you heard were the tires going off. We had one explosion that went off and it echoed through the downtown core in between the buildings, that’s why it was so loud, and then we had the second tire go off a few seconds later.”

Richert says no one was hurt.

He says two private vehicles that were parked nearby did suffer some minor damage.