There will be a slight delay to when students will be able to start the school year in Quesnel’s new middle school on Mountain Ash Road in the Red Bluff area. 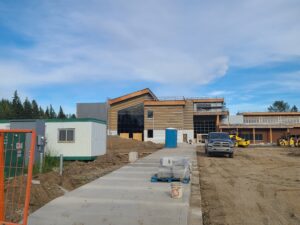 “We planned to have staff on site for September 12th. Grade 8 students will begin on September 14th, and both grade 8 and 9 together will start on September 15th.  This represents a two day delay to the timeline that we had planned coming into the school year.”

Lowndes says there are a couple of reasons for the delay.

“Because of supply issues and staffing shortages throughout the course of a two year process, through the pandemic and through landslides, that have really impacted the ability to get supplies to site.  But I do really want to thank the folks who were involved in this process to keep us on track as close as we even are today, to minimize the delay as much as possible.  There have been a lot of workers involved in this in trying to keep it on track.”

Lowndes says when people drive by they can see that there still is work to do on the site.

“Work will continue throughout the evenings and weekends until the build and the process is fully complete.  However, this will not impact student attendance in any way.”

Lowndes says people will see a lot of changes over the next couple of weeks.

“I know the parking lot will be complete late September.  We’ll see the old building down through mid-September to late-September as well.  I think the public will be excited to see a number of changes to the outside, including grass and the cladding on the outside of the building. Those pieces will really help to spruce up the build.”

Lowndes says the inside of the building also has some work to do, but he says it is already spectacular.

He says the public will get a chance to see just how amazing it is when they are able to hold an open house.