Summer operations at the Big Bar Landslide have been fully mobilized and progress continues to be made.

Gwill Roberts, the Director of the Big Bar Landslide Response with Fisheries and Ocean Canada, said there have been a lot of interesting developments in the Fraser River this year

“At the slide site what we’re seeing right now is a quite good passage for salmon which is a surprise. It’s an improvement over last year,” Roberts said, “we’re seeing early summer sockeye and chinook both getting through the slide site with relative ease.”

He noted that it’s still early days for understanding, analyzing, and collecting the data from their monitoring teams and that they’ll have a good hard look at why this has happened.

Monitoring and tagging are one of three biological programs that continue at the Big Bar site.

Roberts said they have really intensified the tracking of fish from the west side and the east side of the river with sensors. 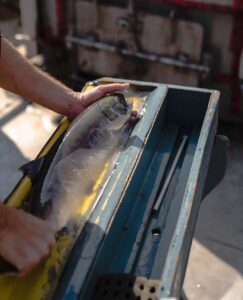 “We have all parts of the canyon from both the West side and the East side of the river covered with sensors. As they approach the slide we can tell where they’re having trouble. The recent data is showing that we have sockeye and chinook getting through that area in about two and a half hours which is very quick relatively speaking. It’s a tough area, there’s a torrent of water that comes through that canyon but they can get through right now.”

Gwill said they’re also monitoring the fish up and down the river from Yale all the way north.

“They’re are hydra-acoustic sensors and sonars so we can get both very pinpointed understanding of fish that are tagged but also more general movements of the large bodies of fish that will come through the river.”

Last year Roberts said was a banner year with 1 point 9 million salmon moving through the canyon.