Elijah and Clay Gordon both won some big money at the Bull Riders Canada event that was held on the final day of the 94th Williams Lake Stampede.

Elijah was third in the long go with a 79 on a bull named ‘Fire Engine Red’, while Clay scored a 74 to finish 4th on ‘Penny Wise.’ 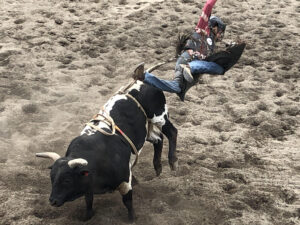 The top 10 then advanced to the short go but not a single cowboy made the 8 seconds.

That left Elijah and Clay in third and fourth in the average as well.

William Bowers from Foremost, Alberta was first with an 82, while Fabian Dueck from Paraguay was the runner-up with an 81.

The Championship buckle in the Wild Horse Race was also handed out on Sunday.

Al Puhallo’s team from Quesnel had the only time on the final day and won it all with two firsts in four performances.

Jordan Botter and Justin Zimmerlee made up the rest of the winning team.

Colton Brown from Smithers was second.

And a 100 Mile House cowgirl was the runner-up in the Wild Cowgirl Race.

Kayle Hartman was closing but lost by about half a length to Lisa Parfiniuk from the Slocan Valley.