A special announcement was made on Tuesday (June 21) afternoon in downtown Quesnel.

“Today’s announcement is that this will be forever known as Lhtako Dene Park.  And that is by unanimous decision of our Council at the request of Lhtako Chief and Council, and on behalf of their elders as well.”

Simpson noted that that area along the bank of the Fraser River and just down the Riverfront Trail, both Lhtako territory, was for for a period of over 10,000 years the second largest First Nations settled population in BC. 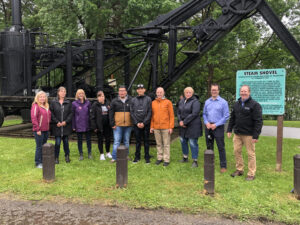 He added that the name change was just the first step in bringing the culture and history of Lhtako into the park.

“For the last two years our staff have been working, particularly with Lhtako elders, on trying to find out how we could bring the culture and history of Lhtako into this place that is sacred and special to the nation.  At the entrance gateway and the big sign you’ll see artist renderings of what this park is going to become.  Our intention is for it to become a special place that tells Lhtako history in special ways.”

Simpson says that will include a couple of large metal sculptures.

“A traditional dip netter with salmon swimming up towards the net.  Where the steam pump is we’re hoping to put in a metal sculpture of the types of salmon that were coming up here.  The other piece you’ll see is very artistic interpretive signage using basalt and sculptures, and those will be the story telling pieces of art that will surround this park.  And then eventually, with work with the elders and the Lhtako community and some archivists, we will then surround the park with lecterns that tell the story in the english language, and we hope to use carrier translations.”

The steam pump and steam shovel will be returned to Likely, as they are not part of Quesnel’s history.

Simpson says the goal of all this is to restore First Nations rightful place in our community.

Lhtako Councillor Raymond Aldred was among the speakers.

“I would to thank you all for joining us here today and welcome you guys to the territory of Lhtako Dene Nation.  We’re very pleased with everything that has been going on with the City.  We’d like to thank Mayor Bob and the Councillors of Quesnel.  What’s happening today is going to be a big step into reconciliation of our people.  And it leaves me wordless.”

Several members of Quesnel City Council were also on hand, along with some CRD Directors, representatives from the MLA’s office, the School District, and many members of the Lhtako First Nation and the community of Quesnel.

The future of Billy Barker Days in Quesnel could be at stake !

Travel Advisory For Motorist In The Williams Lake Area

The future of Billy Barker Days in Quesnel could be at stake !

Travel Advisory For Motorist In The Williams Lake Area