Before his opening statements, a traditional greeting with singing, dancing, and drummers took place, along with a brushing-off ceremony with sage.

Gifts were then exchanged between Trudeau and the First Nations.

“I mostly here to listen, to learn, to hear from elders and community members on what the path forward looks like, not just for this community but for this country. In partnership, in respect, in reconciliation,” said Trudeau.

He thanked them for the beautiful welcome and said he was moved to be there.

After the greeting ceremony was held the Prime Minister spent some private time with residential school survivors.

“We’re announcing 2.9 million dollars today for Phase 2 of the work they’re doing. There will be more Phases and more funding to come. Right now the focus is on documenting and finding the truth but also on supporting survivors, supporting a community that has been retraumatized.”

Chief Sellars said today’s visit by the Prime Minister made him emotional and gave him hope moving forward. 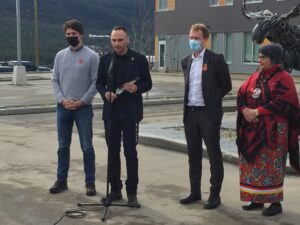 “The things and the commitments that we talked about today are going to make that meaningful impact with Prime Minister Trudeau so that we can move forward and expedite the healing process of First Nations People in this country. We stand with the leader of this country and discuss things of significance that are really going to be and make a meaningful difference in how we move forward as a community, as a City, as a region, and as a country. There’s still a lot of work to do and Williams Lake First Nation knows and understands that but this is a great first step.”