It was close for the first three ends against Turkey before Canada took control of its afternoon game (Sunday) at the world women’s curling championship in Prince George.

Canada broke open a 2-2 tie by scoring three in the fourth end and added another three in the sixth after Turkey got one in the fifth.

The Canadian champions, skipped by Kerri Einarson of Manitoba, ended up with an 8-4 victory in a game called after seven ends.

Canada improved to 2-1, and Turkey remained winless at 0-3.

In a feature game tonight at 7:00, Canada is back in action tonight against 2-0 Switzerland, the defending champions.

The Swiss edged Sweden 8-7 this morning.

In other afternoon action at CN Centre, Sweden scored four in the 9th end to put away Denmark 9-4. The Swedes improved to 2-1 while Denmark is 1-1. 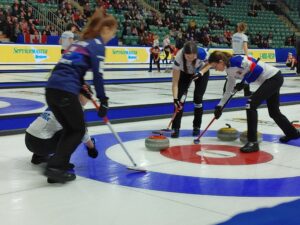 South Korea skipped by Kim EunJung, improved to 3-0 while the Czech Republic fell to 1-2.

In the other game, the USA and their skip, Cory Christenson beat winless Italy 7-6 in 11 ends.

The draw, results, and standings can be found here or here.

The Canadian team will have other round-robin games on Monday and Tuesday afternoon at 2:00, plus Wednesday, Thursday, and Friday at 9:00 a.m. and 7:00 p.m.

Qualification games are scheduled for Saturday at 1:00 in the afternoon with the semi-finals Saturday night at 7:00.

With files from Hartley Miller

Changes are coming to Troll Ski Resort in the North Cariboo

City of Williams Lake is Prepped for Snowfall

100 Mile House Outdoor Rink is Back for the Winter Season