In a game with plenty of twists and turns Switzerland edged Sweden 8-7 in the morning draw today (Sunday) at the world women’s curling championship in Prince George.

The two-time defending champions from Switzerland led 4-2 at the fifth end break before Sweden stole three in the 6th to give the Swedes a 5-4 lead.

The Swiss tied the game with one in the 7th and then went up 7-5 by stealing two in the 8th before the Swedes got a pair in the 9th thanks to a double takeout on the last shot by skip Anna Hasselborg.

Switzerland, skipped by Silvana Tirinzoni, got the winning point in the 10th.

In other games in round robin Draw 3, Japan whipped Italy 9-2, South Korea blasted Germany 7-2 and the Czech Republic scored two in the 10th to beat Scotland 10-9. 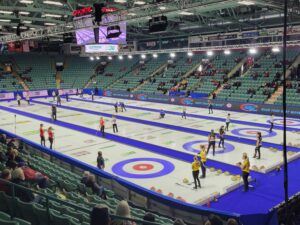 The standings have Switzerland, Japan and South Korea at 2-0, Denmark and the USA 1-0, Canada, Czech Republic, Norway and Sweden 1-1, with Germany, Scotland, Italy and Turkey all 0-2.

The draw, results and standings can be found here or here.

The Canadian team has other round-robin games Monday and Tuesday afternoon at 2:00, Wednesday, Thursday, and Friday at 9:00 a.m. and 7:00 p.m.

Qualification games are scheduled for Saturday at 1:00 in the afternoon with the semi-finals Saturday night at 7:00.