An arrest was made in downtown Quesnel after police surrounded a unit at the Remada Inn on St. Laurent Avenue. 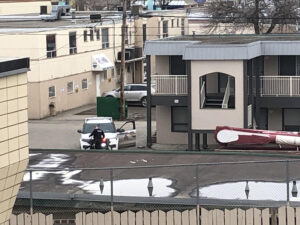 Staff Sargeant Richard Weseen says the Quesnel Crime Reduction Unit, with the assistance of the RCMP Police Dog Services, executed a search warrant at around 2-30 this (Tuesday) afternoon.

“During the search, the police seized a large quantity of heroin, cash, and a loaded sawed off shotgun.”

Weseen says it capped off a one week investigation.

“The Crime Reduction Unit (CRU) observed steady foot traffic coming and going from this location.  It was abundantly clear that the man was dealing drugs from the unit.  The location was in close proximity to support agencies for vulnerable people, which made the file a priority to reduce community harm.”

Weseen says the suspect is no stranger to police.

“The person arrested in this incident was released from jail one month ago on thirteen charges unrelated to this investigation. He was on house arrest and was prohibited from possessing firearms.  We will continue to focus on targeting prolific offenders in areas with high drug and property crimes.”

The 35-year old Quesnel man is currently being held in custody on several charges and is awaiting a bail hearing.