A Williams Lake athlete has been recognized by Archery Canada 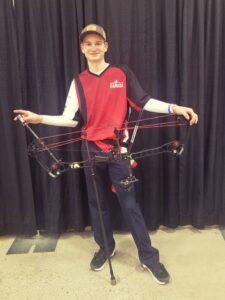 17-year old Isaac Bedford has received two World Archery Target Awards.
One was a gold award when he scored 685 out of 720 at 50 metres in Wroclaw, Poland at the World Youth Championships, and the other was a purple award for scoring 704 out of 720, also at 50 metres, at a shoot in Mission.
Purple is the highest award you can get from World Archery.
Al Campsall, his coach, says Isaac is a rare talent.
“To put that in perspective, although target is not my greatest thing I have won Canadian Championships in target and field and indoor target and many 3D championships, and I have never come even remotely close to scoring a 704.”
Looking ahead, Campsall says he feels Isaac has a good chance at making the Canadian 3D Archery team that will be going to Tunin, Italy in the fall.
Isaac scores were in target though, and Campsall says 3D is the most difficult of the archery disciplines.
“It is significantly more complicated than target or field because not only do you have to judge the yardages of every target that you shoot at, but you also shoot on uneven terrain.  You are shooting uphill, you are shooting downhill, you are shooting across a gulley, you are shooting from lighted areas into dark areas, from dark areas out into the lighted areas.”
Campsall says he feels Bedford has the skills to make the adjustments.
“He has the target skills right now, the archery skills to put himself near the top of any of the archers in Canada, but he is going to be working on his distance judging and judging targets out in the bush with me this spring.”
The tryouts will be in Lac la Biche, Alberta in June.
Facebook
Twitter
ReddIt
WhatsApp
Email
- Advertisment -
- Advertisment -
- Advertisement -