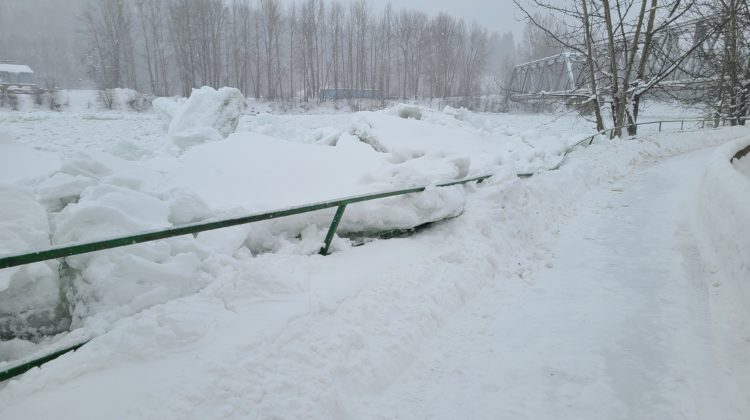 The warm weather has been both good and bad when it comes to the ice jam along the Quesnel River.

Ron Richert, the Director of Emergency Services with the City, says he and the water stewardship person from Emergency Management BC monitored the situation on Tuesday from the mouth of the Quesnel River up to the industrial areas and the pulp mill.

“When it gets warmer like this, it’s not always a good thing because the ice can soften up and as it starts flowing and if you don’t have an opening, it starts to jam up in the narrows and then basically it’s like a jigsaw puzzle, it just keeps getting tighter and tighter in those areas.  But underneath the Johnston Bridge today (Tuesday), it opened right up and that’s a good thing.”

Richert says there is quite a bit of ice upstream though.

He says at this point they are just assessing and monitoring it on a day to day basis, adding that they will likely go back up in a helicopter later in the week to get another update on what’s happening further upstream.

Right now, he says some of the ice slabs are 12 to 14 inches thick.

He says it could be a while before this situation resolves itself.

“Hopefully it will start to melt, and you know make its way up and open up and start flowing.  But things can start getting colder again.  I think the week after next it’s supposed to get down to -7 temperatures, so it could cause us some freezing issues again.”

The ice jam has not only closed the Johnston loop, but the Riverfront Trail in that area as well, and Richert would like to remind the public to please stay away from that area as a safety precaution.