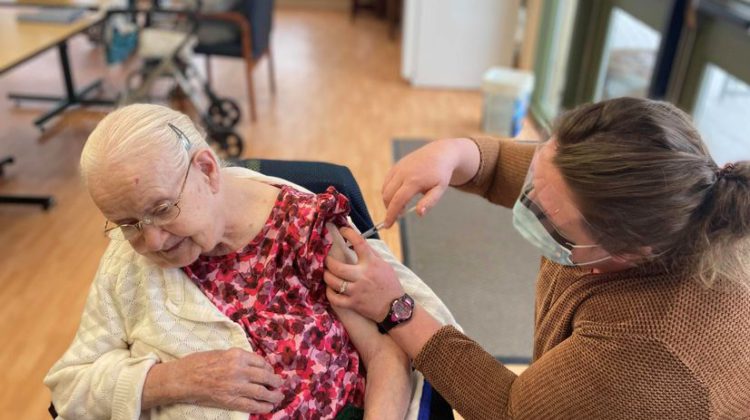 Dr.Bonnie Henry says residents in long-term care and assisted living facilities will be offered a third COVID-19 vaccine dose starting in the next couple of weeks.

“We’ve seen in those congregate settings, even when we have most of the residents fully immunized, if this virus is introduced into those settings there is a significant number of people who will have breakthrough infections, and this in an elderly population can be lethal,” she said.

Booster doses will be provided in long-term and acute care homes along with the influenza vaccine.

Meanwhile, Henry also announced that transmission among BC’s population of children aged 0-4, 5-11, and 12-17 is increasing, while the province is also paying close attention to hospitalizations and ICU admittance among BC’s youth.

As a result of the increasing numbers, regional health authorities will start posting “school potential exposure events” on their websites.

There have been no COVID-19 deaths among BC’s youth since last year when one infant and one toddler passed away.

The testing rate for school-age children has gone up from about 100 per day to over 500 per day, Henry says this increase was expected as students returned to in-class learning.

“If we look by geography, it tells us that case rates in school-aged children and in younger children and older children were increasing prior to school starting in both Interior and the Northern Health region. This reflects the vaccination rates in those communities and the fact that we’re seeing transmission of the virus in those communities and that, of course, affects families and children,” she said.

However, she says that in areas with higher vaccination rates such as parts of Vancouver Coastal and Island Health, transmission among school-aged children is relatively “low and steady”.

Henry adds unvaccinated residents are at a much higher risk of infection and hospitalization, no matter their age.

“The trajectory and the level of cases among school-aged children reflects our overall community vaccination rates. So it’s protection in our community that protects our schools and protects our children.”

Following increasing rates of transmission in the East Fraser region, Hope, Chilliwack, Abbotsford, and Mission will be under new health orders similar to the ones currently in Northern and Interior Health.