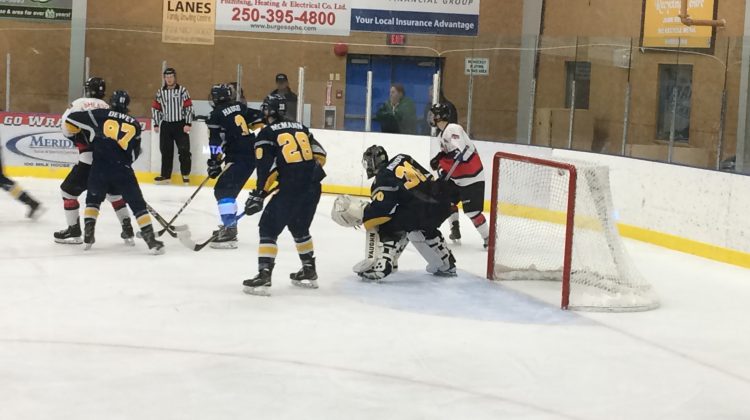 Head Coach and General Manager Dale Hladun says the camp starts at 10:00 today with two small teams of 35-36 kids, and a couple of days of practices and scrimmages, and an exhibition game against the Princeton Posse at the South Cariboo Recreation Centre on Sunday.

“The hard part is, we went dark, and I thought it was the right thing to do. My little joke is we didn’t even play and we still finished only 5 points out of first place because no one played.” Hladun says with a chuckle, “Usually I’m on the road during the season, and I can see, I’ll go to the small town provincial tournaments, and get to know some players early, but this year I didn’t see hardly anybody, so you’re going off of friends and scouts and opinions, and you go to as many camps as you can, but yeah, we’re definitely chasing the tiger here right now.

Hladun says he’s managed to get a good core to start the season, but Chase Vancoughnett-Lafluer is the only returning Wrangler this season. “Chase will be our leader is going to be busy helping me run all these rookies through on how the wrangler way is, the room duties, loading the bus, and acting in the community, and he’s got as big a job as I do,” Hladun says.

“Luckily for us, he was out in Okotoks, and the family bought a ranch in Clinton, so he’s now considered local,” Hladun explains, “Casey Thompson will be our starter, and then from there, I’ll have a lot of 18-year-olds and a few 17-year-old players.”

Hladun says spots in the Camp are still open for some local players.

“Give me a shout, get a hold of me, text or email, you can find my information on our website. I do have room, we could probably add a goalie, a couple of defensemen and a forward or two. I’m going to go with a two-team format right now, but that doesn’t mean tryouts are over, we’re going to get through this weekend, I’ve got all next week, we got another exhibition game against Chase, and that’s why I explain to the kids too, it doesn’t matter at our level, or Junior A or Western League, tryouts really don’t end until January 10th, when rosters are frozen, so when kids get here and they get comfortable and say ‘I’ve made the team,’ nope, you gotta keep making the team, and that’s the hard part.”

The Wranglers’ First Exhibition game will be against the Chase Heat at 2:00 PM at the South Cariboo Recreation Centre.