Police in 100 Mile House were investigating a mischief complaint in Centenial Park yesterday (Tuesday) and wound up with a bunch of counterfeit money.

An Officer recognized a man in the park who was on a 24-hour court ordered curfew and arrested him without incident.

RCMP say he had a substantive amount of what is suspected to be cocaine on his person, along with some cash. 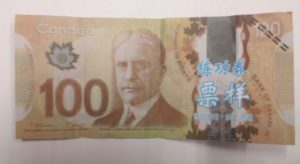 Upon closer inspection, the officer noticed that the 50 and 100 dollar bills had foreign writing and characters on them.

The bills were also made out of paper and not polymer plastic as is real Canadian currency.

Other features not present on the fake bills include – raised ink, a frosted window around the maple leaf and small hidden numbers in the design of the bill itself, along with other security features.

The suspect male was also found with a quantity of real money in his possession.

RCMP says it would be easy for someone to put a real bill on top of a fake one and then present it to a business.

The community is being advised to carefully monitor each bill they receive for payment prior to accepting them.

This is the second time in a week that RCMP have recovered this type of counterfeit currency.

The suspect male remains in custody and charges are pending.