The Prince George Fire Centre has 59 active wildfires in the area, which is a sizeable reduction from the 73 wildfires reported on Friday (August 6th).

There are four wildfires of note in the area and Sharon Nickel with the PGFC said there hasn’t been much change with them, but highlighted some of the actions taken by BC Wildfire Service.

“On August 6th we did have a high-level scan completed at Cutoff Creek (south of Fraser Lake). So that’s just to look for additional hotspots, see if there are any areas that are of particular concern,” said Nickel.

“Moving over to the Tentfire Creek fire in the Dawson Creek zone. That one is still classified as out of control. They did complete planned ignitions over the long weekend, and I believe they were looking at potentially doing more planned ignitions, just waiting for confirmation from the zone on that.”

Nickel said the Helmut/Kotcho Lake fires, in the far northeast corner of the province, have seen enough precipitation in the past couple of days to downgrade the Evacuation Order to an Alert. 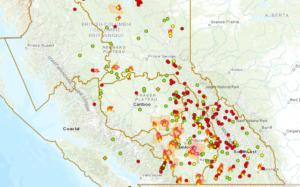 There are 280 active wildfires across BC, with 31 of those fires considered of note.