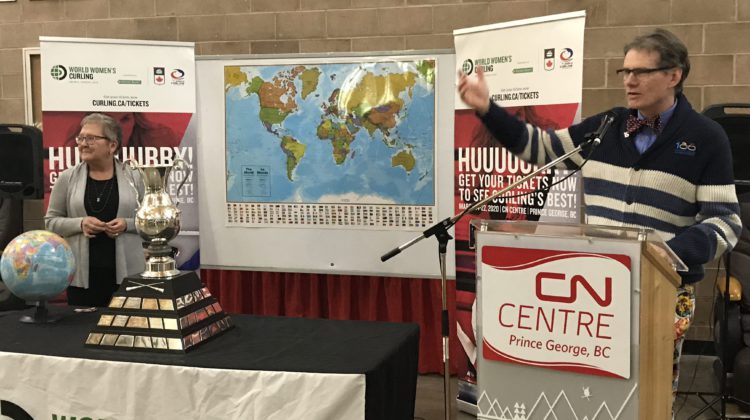 Glen Mikkelsen addressing the media in Prince George ahead of the World Women's Curling Championship in March (Photo supplied by Brendan Pawliw, MyPGNow.com)

After enduring a tough blow due to the pandemic, Curling Canada has decided to come back to Prince George.

The 2022 World Women’s Curling Championship will be hosted in the northern capital from March 19th to 27th at CN Centre.

The announcement was made today (Thursday) by Curling Canada and the World Curling Federation (WCF).

“Our nation is ready to welcome the 2022 Women’s World Curling Championship curlers, coaches, families and fans to our unceded ancestral lands,” said Chief Dolleen Logan of the Lheidli T’enneh First Nation. “Our members have welcomed visitors to our territory for thousands of years and the excitement of having a major sporting event hosted in Prince George never grows old. With COVID-19 now in check we look forward to Prince George hosting more large gatherings and special events such as the 2022 Women’s World Curling Championship.”

Prince George will be hosting its first WCF event, while it will be a fourth opportunity to welcome the world’s best women’s curling teams for BC.

“We all have vivid memories of that week leading up to the cancellation in Prince George, and we know how much excitement there was in the city leading up to the event, so today’s announcement is particularly gratifying,” said Katherine Henderson, Chief Executive Officer of Curling Canada.

“I know that Curling Canada and our partners at the World Curling Federation really wanted to make sure Prince George got its opportunity to show off to the world, and I’m positive that it will put on a championship that will be remembered by all who participate.”

Previously, Prince George hosted 2009 Road to the Roar Pre-Trials as well as the 2000 Scott Tournament of Hearts, which was won by B.C.’s Kelley Law.

Tickets will go on sale at a later date.

Prince George was slated to host the 2020 World Women’s Curling Championship but was cancelled due to the pandemic. Kerri Einarson’s rink out of Manitoba was to represent Canada at the tournament.