The wildfires raging across BC are destructive and costly, but an advisor for the United Nations (UN) believes there’s a solution that lies a little outside of the box.

Sahota sat down with MyPGNow and discussed how AI could help predict and fight fires across BC, and some of the utilizations of AI already in place across the world.

“A lot of the focus is on early detection. We know that there are different variables in play that could trigger a wildfire. So we look at three things: fuel, oxygen, and energy,” said Sahota.

He said looking at things like weather conditions in the area, detecting flammable substances, and what causes fires (lightning, etc.) can help in early detection.

Sahota believes having lots of accessible data, and having subject matter experts to teach an AI are some of the main foundations that would allow a system like this to work effectively.

“When you think about detection, there are different types of fires. Some of them may be appropriate and some of them may not. It may be that they’re setting backfires to clear out some brush. So screening those out becomes paramount.”

“Ironically, Amazon had a similar issue, where they wanted to turn their Alexa into kind of also a home security system. So if someone broke glass it would automatically call 911 and say someone’s trying to break in. But the problem is, there’s a difference in the way someone is breaking into a glass door or window, versus someone breaking a wine glass.”

Sahota mentioned that the County of Sonoma in California has already started to use a detection system with AI that utilizes hundreds of cameras across the US to better detect wildfires. 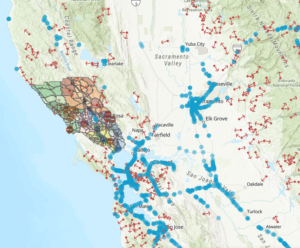 In terms of predicting wildfires before they start, Sahota said there is already a framework in place that’s predicting a different kind of natural disaster.

“So this is actually one area where we’re doing this to predict coastal floods, and there’s actually a project going on right now in partnership with a University in South Korea to actually start doing a better job of predicting that. So there’s been some preliminary benchmarking on that. But that type of framework could be applied to wildfires.”

Seoul National University is currently using algorithms to predict the risk of floods across the coast of South Korea.

The last thing Sahota touched on was the need for awareness and collaboration.

He said that local problems have global solutions and that wildfires aren’t just a problem in Canada or the US, but nobody is trying to stitch these pieces together.

“That lack of visibility is a big factor. As human beings, we start working on something, we’re tracking a problem, we get really heads down that we forget everything else that’s going around. It doesn’t dawn on us that somebody might be doing that. But we read about or see a video, it might trigger something, like hey, those guys are working on the other half of the problem I’m trying to solve, maybe there is that collaboration opportunity.”

BC offers data on fires across the province with things like the BC Wildfire Dashboard, a list of the fires of note broken up by the fire centre, and weather maps that break things down like precipitation, humidity and wind speed.