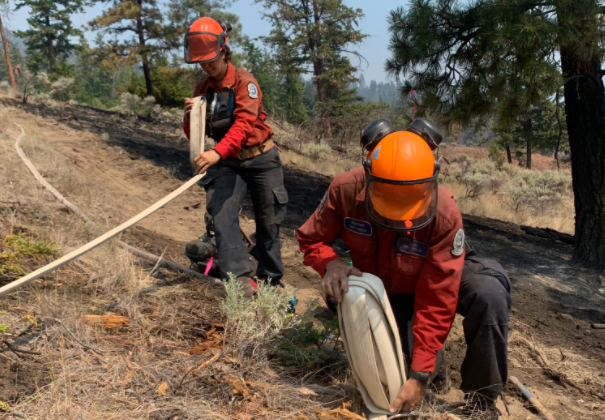 100 firefighters from Mexico arrived in BC today (Saturday) to help tackle the ongoing wildfire season blazing throughout the province.

Mike Farnworth, Minister of Public Safety and Solicitor General, greeted the firefighters at the Abbotsford airport, where they were immediately tested for COVID-19 upon arrival.

“For now we continue to face difficult fire behavior and conditions throughout the Central and Southern Interior, similar, challenging weather is forecasted for the foreseeable future,” explained Farnworth.

They will be working to battle fires primarily in the Central and Interior regions for the next 30 days, staying in fire camps located near the wildfires they’re working on.

“Our provincial and contract crews have been working hard and the assistance we’re seeing from Mexico and others is a welcomed relief to all British Columbians,” he added.

Almost 3,200 men and women are working to get the wildfire season under control, according to Farnworth.

Crews from Quebec arrived in BC yesterday, joining other forces from across the country as well including Alberta, New Brunswick, and Nova Scotia.

Members of the Canadian Armed Forces have also been assisting in the efforts, and 350 more are scheduled to arrive in Vernon soon.

Currently, there are 48 wildfires blazing through the Prince George Fire Centre, 40 in the Cariboo, and 4 in the Northwest Fire Centre.

There are 8 wildfires of note in the PG and Cariboo Fire Centre, and one in the Northwest Fire Centre.

One of the wildfires of note in the PG Wildfire Centre recently had the evacuation order and alert rescinded, the Grizzly Lake wildfire, as 74 firefighters, 3 helicopters, and 14 pieces of heavy machinery are working to control the blaze.

Since April 1st, 1,197 wildfires have burned in BC, equating to about 376,436 hectares of land across the province.

There are a total of 57 active evacuation orders in the province and 76 alerts.

“We will see the other side of this fire season but we need to continue to work together to take care and to stay safe,” added Farnworth.