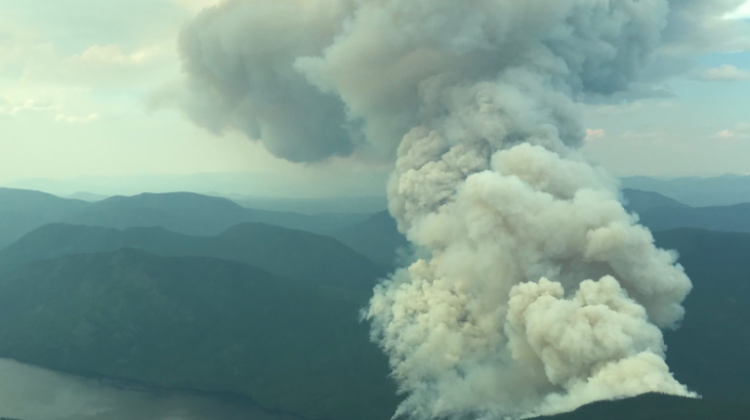 The BC Wildfire Service Crews can continue safely conducting more direct attack operations on the Flat Lake Fire because of expected weather conditions.

Ignitions will happen on the Flat Lake Fire today, if conditions allow. These are planned for an area north of Davis Lake, and areas south of the Gustafsen and Neilson Lakes. The Flat Lake Fire is estimated to be 32,164 hectares in size. Crews are continuing to work on containment lines on the east side of the fire, and planning is underway to establish a machine guard on the south side.

A 10-foot black line has been established on the north and west side of the Canim Lake fire, where the fire has burnt to the guard.  The BC Wildfire Service says blacklining is the process of removing fuels near the guard will small planned ignitions. There was minimal fire activity according to the BC Wildfire Service, with most of the fire burning within the existing perimeter. The Canim Lake Fire is estimated to be 2,673 hectares.

A fire guard has been placed all around the perimeter of the Big Stick Lake fire, which is estimated to be 7,321 hectares. The BC Wildfire Service says crews and bucketing helicopters are working to cool hotspots and reinforce the fireguards in critical areas around the fire.

According to the BC Wildfire Service, the Hotnarko Creek fire is estimated to be 1,500 hectares in size. They say the fire demonstrated low-intensity fire behaviour on Friday.

The Purdy Lake fire is estimated to be 8,100 hectares. The BC Wildfire Service says there has been no growth on the fire in the past few days. Crews are patrolling and extinguishing hotspots along the southern flank of the fire.

There was minimal fire activity on the McKinley Lake fire on Friday, that fire is estimated to be 1,834 hectares.

The Chasm fire is 454 hectares, and crews are working to increase blacklines around the fire to 50 feet, as well as continue to patrol and extinguish hotspots around the perimeter.

The Young Lake fire is estimated to be 2,631 hectares in size. If conditions are optimal, a planned aerial ignition could occur on the northeastern flank that will build off yesterdays hand ignitions.

As of Saturday, there are 40 active wildfires within the Cariboo Fire Centre, including eight fires of note.

There are six active fires in the Quesnel Fire Zone, nine in the Central Cariboo Fire Zone, three in the Chilcotin Fire Zone, and 22 in the 100 Mile Zone.