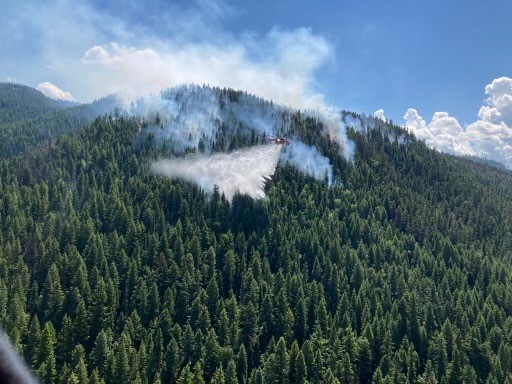 Crews are making progress on the Cariboo’s wildfires thanks to favourable conditions.

There are currently 43 active wildfires within the Cariboo Fire Centre, and nine fires of note. There are six in the Quesnel Fire Zone, ten in the Central Cariboo Fire Zone, and Four in the Chilcotin Zone. There are 23 in the 100 Mile Fire Zone, with the Incident Management Team managing 17 of them.

The Incident Management Team managing the Flat Lake wildfire says lower temperatures and higher relative humidity means crews can conduct more direct operations on the fire. Fire Information Officer Rosalie Macaulay says there was moderate growth on the Flat Lake Fire, which is now estimated to be 32,194 hectares in size. She says the increase in estimated size is also a result of more accurate tracking.

Macaulay says crews are also making progress in increasing the containment of the South of Canim Lake Fire. This fire is estimated to be 2,673 hectares, which is also a result of more accurate mapping.

There hasn’t been much growth recently in the Succour Lake fire, but Macaulay says a smaller fire has combined with this fire. It is estimated to be 1,600 hectares in size. The BC Wildfire Service says natural wetlands, lakes, and less volatile forest fuel are providing containment on two sides as well as Lang Lake to the north.

In the Cariboo Fire Centre, the Purdy Lake Fire received rain in the last few days and is still holding at 8,000 hectares. The evacuation alert for the Titetown and Nazko areas has been lifted by the Cariboo Regional District.

The McKinley Lake Fire is estimated to be around 1,835 hectares. Fire Information Officer Madison Smith says there has been minimal fire activity over the past few days, and an ignition specialist is assessing the fire for potential burn opportunities. “They’ll have to work with the grounds crews on-site, and they’ll have to pick a day when the weather is favourable for that operation to take place,” Smith says.

The Big Stick Lake Fire sustained variable winds of 30 km/h from the southwest, which led to continued fire activity. Smith says there were also interior pockets of fuel burning within the perimeter yesterday. She says a fireguard has now been completed around this fire, which is estimated to be 7,321 hectares.

An aerial heat scan is planned to assess the remaining hotspots around the perimeter of the Hotnarko Fire, which is estimated to be 1,500 hectares.

The Young Lake Fire is estimated to be 2,631 hectares in size, but Smith says an updated track has not been completed due to limited visibility. She says the size is expected to be bigger once the track is completed. In addition, aerial ignitions are being planned if conditions are optimal.