BC declares a provincial state of emergency 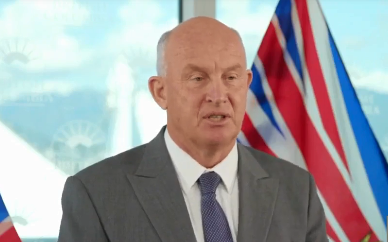 The declaration goes into effect tomorrow (July 21) and will initially last for 14 days.

“In a briefing last night (Monday), I received word that we’ll be facing a few days of very difficult weather in the Interior. This declaration will address the potential of a mass evacuation scenario and provide our government with the means to secure the accommodation spaces necessary to house our citizens, if necessary,” said Farnworth.

Cliff Chapman with the BC Wildfire Service said there are 40 Evacuation Orders across the province affecting about 5,724 people in BC.

69 Evacuation Alerts are in effect for around 32,076 people across the province.

“We are expecting what we’d call a subtropical feed coming up from the United States which is going to bring significant wind into the Southeast Fire Centre and the interior of the province.”

Chapman said this will potentially increase wildfire activities in BC.

Over 3,000 people are fighting wildfires across the province, and 500 additional staff are expected to arrive in the next 10 days.

Looking at the active fires in the province, there are: