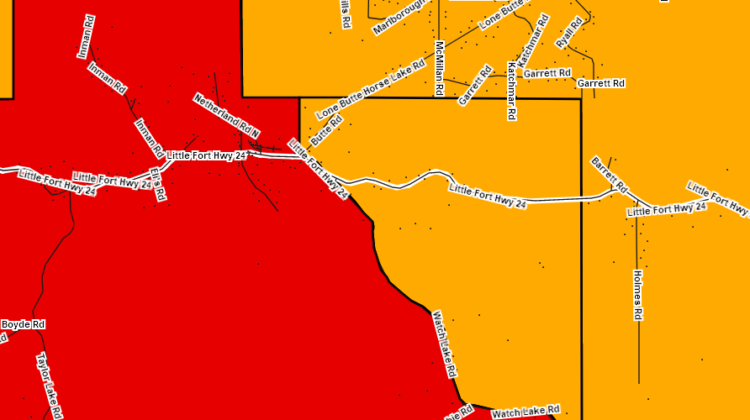 Highway 97 remains open for now, but the Flat Lake wildfire is moving in that direction.

Fire Information Officer Erin Bull has the latest on that fire that is burning southwest of 100 Mile House.

“The Flat Lake wildfire has grown.  It’s estimated to be about 10,000 hectares at this time.  Fire growth has been primarily in the southeast direction.  Today, we do have helicopters bucketing that area of the fire.”

Bull says the fire is still a few kilometres away from the Highway, but she says more growth is expected today.

In addition to attacking the fire from the air, Bull says they also have heavy equipment and ground personnel working on it.

“Heavy equipment is also working in multiple other areas.  We have about 34 ground personnel working as well.  Structural protection equipment remains on scene and they have deployed structural equipment on a number of properties in the area.”

An Evacuation Order is in effect for more than a thousand properties in the Flat Lake to Green Lake area.

Other wildfires that have shown recent growth include the Purdy Lake wildfire, south of Batnuni Lake.

It is now up to an estimated 78-hundred hectares in size, from 63-hundred yesterday.

That fire has led to an expanded evacuation alert that now includes almost one thousand parcels of land in the Titetown and Nazko areas.

And one other fire that has increased in size is at McKinley Lake.

It is now up to an estimated 1,834 hectares but the BC Wildfire Service says that is due to more accurate mapping.

Bull says the Canim Lake wildfire hasn’t shown a lot of growth over the past few days, but she says it is hard to tell.

“I wouldn’t say there has been a significant change in size.  The area has been quite smoky over the last few days which makes it difficult for our helicopters to fly the perimeter of the fire and get a more accurate track, so there certainly has been some growth, but that is the most updated size that we have at this time.”

It is still listed as approximately 1,651 hectares in size.