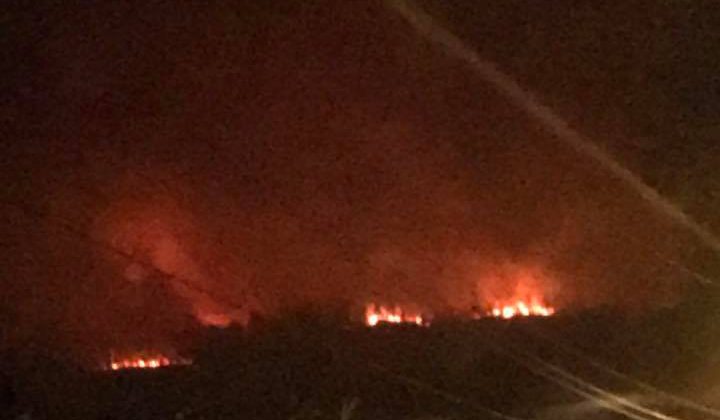 "Hoping for rain!!!" said Myron Theodore on Facebook who took this photo Saturday night of a wildfire right above Canim.

The BC Wildfire Service is reporting that a temperature inversion occurred last (Monday) night and is forecasted again for this evening.

“A temperature inversion essentially means that higher temperatures are occurring at lower elevations.  That often results in the humidity in the area remaining quite low overnight, whereas often we see he humidity come back up at night.   When we say that we mean our recoveries are usually low or not good.”

Bull says the fire did increase in size due to a controlled burn, and it is now an estimated 1,753 hectares.

“Yesterday (Monday) our crews did a controlled ignition on the east flank of the fire which was very successful.  Quite a bit of that smoke was visible from Canim Lake.  What that ignition did, it covered approximately 113 hectares, and it essentially brought the edge of the fire into an area that is workable and accessible by equipment and ground crews.”

She says the east flank is the side of the fire that is towards McNeil Lake.

Today, Bull says today they are working on a second guard on the north flank that would be closer to the fire.

More than 16-hundred parcels of land in the Canim Lake and Forest Grove areas are on evacuation alert because of this fire.