New wildfire has popped up just west of Williams Lake 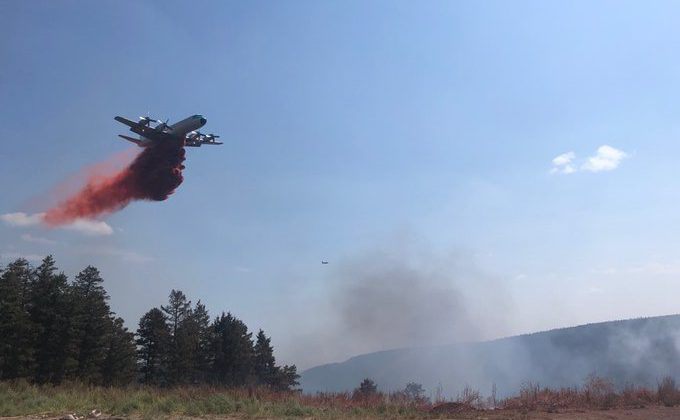 Fire Information Officer Jessica Mack says the fire is on the east side of Soda Creek Road.

“That one is estimated to be about one hectare in size.  Air tankers have actioned that fire and we do have aircraft and personnel that are working to suppress that fire right now.”

Mack says there are currently 70 active wildfires within the Cariboo.

That total includes 10 in both the Williams Lake and Quesnel fire zones, and 8 in the Chilcotin.

Mack says they have seen increased fire activity over the past couple of days, even to the point where personnel had to be pulled back on the Big Stick Lake wildfire due to safety concerns.

She says they are playing a bit of catch-up on that fire today.

“Our personnel are working to re-establish machine guard and hose lay in areas where the wildfire did cross the guard.  And we do have some aircraft that are in the area as well that are working to cool hot spots.”

Mack says the estimated size on that one is about 750 hectares.

An Evacuation Order is in effect for that fire impacting 27 parcels of land.

The Purdy Lake wildfire, south of Batnuni Lake, is now up to an estimated 2,800 hectares in size.

Mack says it is still moving in a southerly direction.

“BC Parks has been engaged and we have developed a plan for fire suppression within the Kluskoil Lake Park, and there is a guard that is around the northern flank and heavy machinery will focus efforts on building guard on the western and eastern sides of the wildfire to create some containment lines.”

An evacuation alert for Titetown was expanded over the weekend to include the Nazko North area.

The South of Canim Lake fire, that has more than 1,600 parcels of land on evacuation alert, is now up to an estimated 1,640 hectares.

Erin Bull is the Fire Information Officer in charge of that fire.

Bull says that work that is being done is between the fire and the Canim Lake and Forest Grove residents, although she says most of the growth has been away from those communities.

One other wildfire that has seen some growth in the past couple of days is the Succour Lake wildfire, which Bull says is now up to 528 hectares in size.

“Crews have completed a hose lay around a 12 hectare spot fire on the southeast flank, and will utilize small controlled ignitions to remove unburned pockets.”

There are seven fires of note in the Cariboo right now.