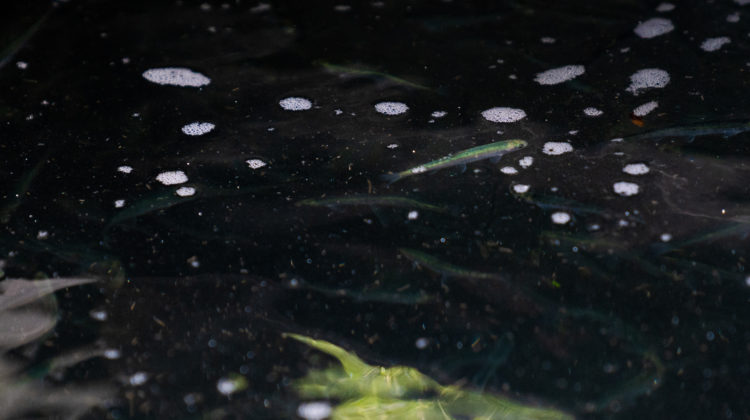 Sockeye Fry (provided by Department of Fisheries and Oceans)

“The next large population of salmon we are expecting are the early Stuart Sockeye, their run size is projected to be up to 18-thousand, following that will be an even large Sockeye runs and projections could be that there will be up to a million Sockeye.”

Crowe added that the early Stuart sockeye will be coming through in July while the rest of the runs will be in August and September, September will also be when the Pinks start moving through that area as well.

Crowe also spoke about the monitoring system that allows them to know what is going on with the fish at the slide site.

“We have expanded this considerably since last year putting out more comprehensive and extensive monitoring equipment in order to have a better understanding, more detailed granularity in regards to fish movement and behavior above, through, and below the slide site. We incorporate two systems to monitor fish. One is to put in sonar stations below and above the slide site which detect fish moving through the water column but we also apply radio tags. As these fish pass through receiver stations, the tags are picked up allowing us to get information about how individual fish are moving through the system. By the end of the season, we have a significant amount of radio tag data that allows us to then do significant analysis to understand fish movement.”

Director, Big Bar Landslide Response, Fisheries and Ocean Canada, Gwil Roberts said the cost to date, as of the end of April, was 131-million dollars.

Roberts said because they are working in a very remote and inhospitable site, there were dirt roads that needed a tremendous amount of improvements, they had to build roads as well, remove a very large amount of material and contend with the slope

“The same slope that created the landslide and deposited approximately 110-thousand cubic meters of material into the river in 2018, due to its angle and due to the weather at Big Bar, we need to stabilize that slope on a continuous basis and that means we have scaling crews and crews bolting and stabilizing the surface.”

Roberts said the slide that happened on November 1st, 2018, was discovered in June 2019 and as of this past Tuesday, it’s been 2-years that they’ve been working on the site.