A new piece of art has popped up in Downtown Quesnel

The statue, in the Billy Barker Casino parking lot at the corner of Kinchant Street and Barlow Avenue, features a miner on top of a mountain with a pickaxe. 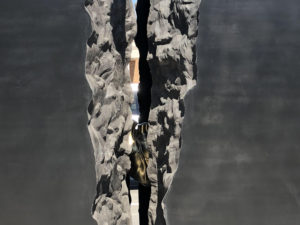 The mountain is split and then there is a heart of gold inside.

Hotel owner Brad Kotzer give the artist, Aaron Harder, the credit for the concept.

“I just told him I wanted something to do with a mining theme since my hotel, which represents Billy Barker from Barkerville, is a mining theme hotel, so that was all I gave him, so he came up with this. They used a pickaxe in the old days mining, so that’s as far as the meaning goes.”

Kotzer says the piece will be lit at night as well.

“I believe it’s supposed to be an orange-yellow light coming up shining through the mountain and onto the miner.”

The public’s first look at that will be tonight. (June 17)

Kotzer says it was supposed to go up last year.

“This was ready to install last fall but with COVID, I put everything on hold, I said it just wouldn’t be appropriate to be putting a big expensive piece of art up when I’m shut down and scrambling for money, so we put it in storage over winter.”

Kotzer says once he found out when they might be reopening he wanted to have it done before then, saying it was a bit of a positive news item after some rough months.

The Casino, closed since March of 2020, is tentatively set to reopen on July 1st.