More trail development planned for the North Cariboo in 2021

Trails Coordinator Ian van Leusden had the floor and went through the work that was planned for 2021 on all eight of the Quesnel area’s trail networks.

That includes the Wonderland trail network on Quesnel-Hydraulic Road that is a legally sanctioned rec site and Trails BC Location that is maintained by the Goldrush Cycling Club.

“This year the cycling club was able to secure NDIT (Northern Development Initiative Trust) funding and COVID funding for the construction of four new trails….one kids loop, one intermediate and two advanced trails, as well as upgrading the original Wonderland Trail.”

Van Leusden said this project has been a huge success and is well used.

“You can go there during the week and there is a full parking lot. You can go there on the weekend and the parking lot is overflowing onto Quesnel-Hydraulic Road.   It’s about 42 users per day going through the trail counter up in that region.”

Van Leusden said the one piece that is probably missing from this network moving forward as a future initiative is a destination trail linking Dragon Mountain to Wonderland through the Hallis Lake connector.

He said it would be about 8 kilometres and would connect those two networks at a cost of approximately 230 thousand dollars. 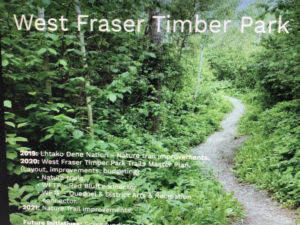 As for West Fraser Timber Park, this year’s plans are to do some nature trail improvements

“We do have a grant that is pending to accomplish the big nature trail improvements and the West Fraser Timberpark to Red Bluff connector trail, as well as some preliminary studies for the West Fraser to Rec Centre, so some geotech and environmental aspects, because that is right in some riparian and wetlands area.”

The plan for Pioneer Park, pending some grant funding, is for low mobility trail construction and overall site improvements.

“We’re looking at a 1-kilometre low mobility trail and then bringing all the existing single track trails up to standard, as well as improving the lakeshore access.   There is quite a steep old quad trail that takes you down to the grassy beach access.   We’re looking at kind of lowering those grades to make that accessible for everybody, as well, if we are successful, we could look at the construction of a low mobility fishing dock down at the water there.”

Van Leusden also noted that the bike park in behind the Quesnel and District Arts and Recreation Centre was in need of a major upgrade.

“We have funding for a strider bike zone, and what I mean by that is utilizing that rubberized material that you see on all the new playgrounds, and creating almost a pump track for kids on strider bikes to get into the sport to start learning how to maneuver a bike in a safe atmosphere where if they crash it’s not going to hurt them too significantly.”

Plans also include progressive jump lines, an upgrade of one of the existing flow trails, as well as the skills park connecting trails, and even bike and gear rentals.

Van Leusden said that 2021 plans for the Airport Trails, off of Quesnel-Hixon Road, include the maintenance of the 3 kilometres of trails that were developed in 2020.

Beetle repellent and forest health will be the focus for the Claymine low mobility trail in the Bouchie Lake area this year with trail improvements on the radar for 2022.

And finally, for the Kostas Cove trails in the 10 Mile Lake area, some phase two planning is in the works for 2021.

Van Leusden said that the Parkland Rec Commission has expressed interest in a bird viewing area in the wetlands, and would like to see some low mobility trail developed and some boardwalk, so people could then get into that area.