New Quesnel school is on schedule and on budget 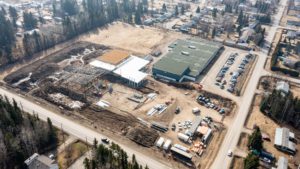 Secretary Treasurer Jennifer Woollends says the build is going really well…
“If people are able to drive by the site they can see that it is definitely progressing and we’re seeing the building emerge.   The new school is now officially out of the ground with the completion of the foundation and footings, so the entire footprint of the building is there, so it’s exciting.”
Woollends says underground services such as sanitary drainage and electrical are being installed in preparation for the floor slab, and structural steel for the east and west classroom block are going up and is expected to be completed by Mid-May.
She says the roof will then be next.
“Near the end of May the roof contractor is scheduled to start installing the roof system.”
Woollends says the project is on schedule and on budget.
The 52-million dollar school, to be built on the Maple Drive School site in the Red Bluff area, is expected to be completed by the spring of 2022.
It will have the capacity to hold 550 students and will be the first new school in Quesnel since 1997.
That was to replace Riverview Elementary School after it was destroyed in a fire.
Thew new Quesnel Junior School, with learning pods and learning stairs and even a daycare, is being built for what is called “21st Century Learning.”
Facebook
Twitter
ReddIt
WhatsApp
Email
- Advertisment -
- Advertisment -
- Advertisement -