UPDATE: Quesnel-Hixon Road closed due to large slide-Public asked to stay away ! 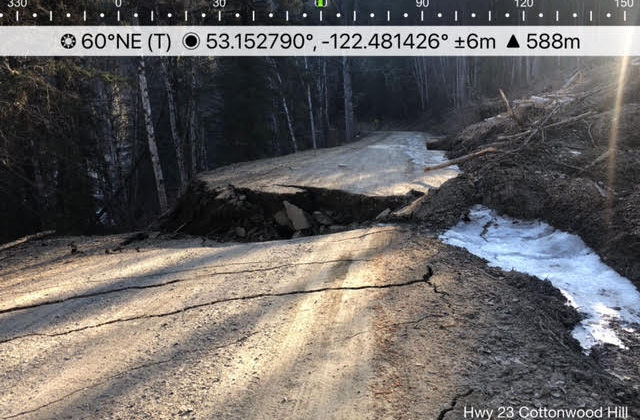 (Photo provided by Ministry of Transportation)

The public is being asked to stay away from Quesnel-Hixon Road due to a slide on the Cottonwood Hill.

“I know people like to come and look and stuff but it is actively moving, like you can hear the trees snapping and ground moving.   A large area went into the river itself which we saw happen this morning from the drones, it is a very large mass, rotational slough in the tens, if not hundreds of thousands of cubic metres potentially.”

Andrushko says in his 17 years, he has never seen this mass of material moving, adding that the aerial photographs show from the river to the upper cracks could easily be 700 to 800 metres up the mountain.

He says the road is not passable.

“It is actively sliding, trees across the road, the elevation of the road it ranges up and down by two to three metres in each direction and it’s sliding down also, so we had it closed at the top of the hill by the mailbox on the south end, and on the north end the road is closed just on the north side of the Cottonwood River Bridge.”

Andrushko says the Ministry has been sending photos to the geotechnical engineers, but he says it will be a while before the area stabilizes and they can go in and take a look in person.

He says nobody is stranded as there is a way out in both directions, either back to Quesnel or on Olson Road on the north end.