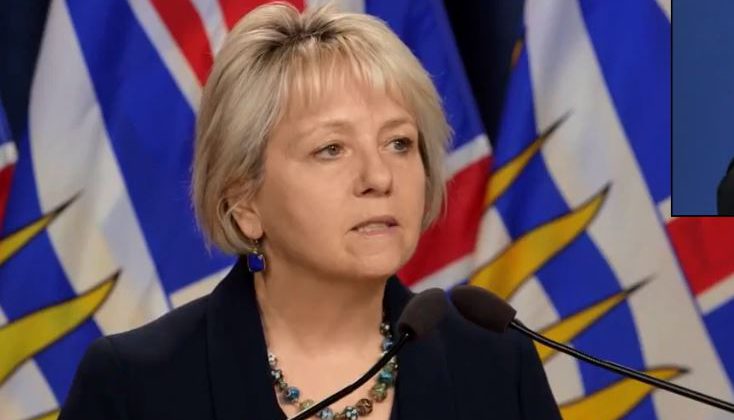 This is after the province broke the single-day case count record over the weekend with 1,072.

She says 43 of the new cases were in Northern Health, where the total is now 6294.

Nine people are in ICU, and, with 126 new tests in 24 hours, the daily positivity rate is 34 percent.

“That is about three percent of our active cases right now,” said Doctor Henry.

She says there is a time delay when it comes to identifying variant cases.

B.1.1.7 has accounted for about a third of B.C.’s daily case total, and Doctor Henry expects this number to increase.

“It can spread more easily, it is the one that tends to increase rapidly. We’ve seen in Ontario that it is about 60 percent of all new cases. We are probably a month or so behind them,” she said.

She adds over 90 percent of new cases are now screened and genome sequenced for variants.

Northern Health confirms the health authority has seen a total of 15 VOC infections since the first one was reported on March 15.

Doctor Henry says the number of young people in ICU across B.C. is increasing.

She attributes the spike to people continuing to gather in small groups of different, changing people.

“Unnecessary travel and social gatherings are fuelling the fire for variant of concern transmission – and we all have the ability to slow that down,” said Doctor Henry.

“All of our connections need to be safe, small connections using all of our layers of protection, all of the time. If you choose to spend time with anyone other than your immediate household, it must be outside, it must be small and it must be safe.”

On the vaccine front, 912,056 people have rolled up their sleeves for their first dose.

The ‘Get Vaccinated’ online vaccine registration and booking system for B.C.’s age-based immunization program has launched, allowing everyone to register and then later book their vaccine appointment online, when eligible.

People 71 and older, Indigenous peoples 18 and over, and individuals who have received their ‘clinically extremely vulnerable’ letter may book appointments.

The parallel worker-focused program remains on pause until more information is available on the safety signal connected to the AstraZeneca/COVISHIELD vaccine.

14,118 people under public health monitoring as a result of identified exposure to known cases.

A further 95,691 people who tested positive have recovered — roughly 90 percent of cases.