Almost 100 years ago the last sternwheeler went down the Fraser River in the Cariboo.

Elizabeth Hunter, the Museum and Heritage Manager in Quesnel, says the last one ran aground and eventually sank in the Fort George Canyon in May of 1921.

She says it was originally called the City of Quesnel. 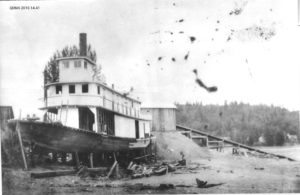 as built by John Strand, who built the Cariboo Hotel on Front Street and our first hospital and lots of other things in town.   It sounded like it didn’t do well on its first voyages, so in the same year it was lengthened.   The quote is used that it was lengthened and its name was shortened, so it became ‘the Quesnel.’   From 1919 to 1921 it mostly ran between Quesnel and Fort George.”

Hunter says the first voyage of the 2021 season turned out to be its last.

“It was a wood fire boiler, so they hired people to cut wood and there were these piles of wood up and down the river, and you would have to go in and restock your wood to make your journey.   But the wood was green, it wasn’t dry enough, so they couldn’t get up enough steam.   So when it went into the canyon it sort of got slewed sideways, so it kind of went through the canyon broadside and hit a rock and got stuck on the rock.”

Hunter says a life boat was used to get some people to shore, but she says it was against the current and took about an hour and a half.

She says they also pulled a cable over and secured it, so there was another means of escape that could ferry people across on a cable line with the life rope, but she says most of the passengers chose to stay on board that night.

Hunter says they were rescued the following day by a smaller sternwheeler.

She says the crew managed to save all the freight, including some tobacco and two percent beer.

It took a couple of months to get it off the rocks, but “the Quesnel” then sunk

Hunter says sternwheelers were also prominent in the 1860’s, mostly running from Soda Creek to Quesnel, hauling freight during the Cariboo Gold Rush.

“One of the reasons why the sternwheeler was so useful is because it could navigate in really shallow waters, and it didn’t really need formal docks and landing stages.   They could pull into the shore and just throw a gang plank down and then reverse the direction of the wheel and pull themselves out into deeper water.” 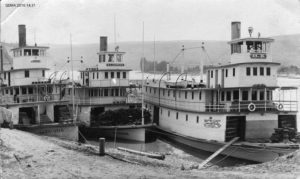 nter says they have pictures of as many as four sternwheelers lined up where Ceal Tingley Park in Quesnel now is.

She says they were as long as 150 feet and could carry as many as 100 passengers.

Hunter says they could have a pretty short life.

“They had to be rebuilt or a new one commissioned every 10 or 12 years or even shorter if they ran aground on the rocks, there were a number of wrecks in 1919-20.”

Hunter says another one after ‘the Quesnel’ wasn’t built likely because the railway was coming.

“In 1921 the Pacific Great Eastern Railway was coming through.   They expected it to go as far as Prince George.   It got to Quesnel in the summer of 21 and then there were problems crossing the Cottonwood River, so it didn’t actually go through until the 50’s.”

Hunter says it was just much quicker to move freight by train.