The Quesnel Volunteer Fire Department responded to a structure fire at around 9-30 on Monday morning. 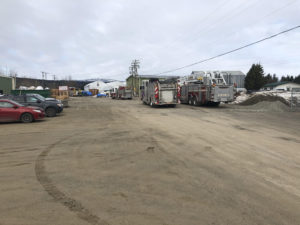 Duty Officer Bart Schneider says the call came in to what used to be known as SilvaGro Nursery on Lear Road.

“What we were told is that the power had been recently turned back on into this area, and when the power came back on they noticed sparks dropping down from their transformer and power control room.   When I arrived on scene there was smoke showing from the ceiling, through the roof of the building, and the transformers that feed the building had been kicked out”

Schneider says the fire was extinguished quite quickly.

“When the first engine arrived on scene, we sent a crew of three in to investigate and they found the fire and extinguished it immediately.   We had to a little bit of overhaul, check for some extensions, but that turned out to be all good, so the fire was out at this point in time.”

Schneider says most of the damage was contained to that one area.

“Most of the damage is contained to their main electrical switch box.   So it actually stayed within the cabinet.   There is smoke damage to the rest of that room, but the door was closed to that room so it was contained to that area.”

Schneider says there were people working there at the time but not near the area of the fire.

He says they followed their evacuation procedure and no one was hurt.